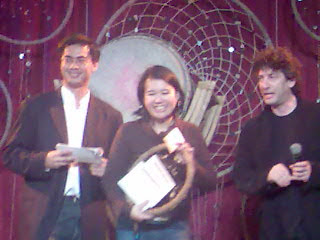 Yvette Uy Tan is a prolific writer whose works (both fiction and non-fiction) have appeared in publications like Philippine Speculative Fiction, The Digest of Philippine Genre Stories, Rogue Magazine, and numerous others. She has also won a few awards including the Palancas and the Graphic/Fiction Awards.

I'm a media mercenary -- I'll write anything for anyone on any topic. I once said that I'd do everything except politcs but guess what? I just did my first political piece about two months ago and it was surprisingly well received. I love writing about my interests, which can be summed up as: music, movies, food, personalities, business and finance, and of course, horror. So yeah, I'll pretty much write about anything.

I have always wanted to write something about the Martial Law era, without going into the politics of things. I was the last of the Martial Law babies so even if I spent the seventies and early eighties in a cloud of confusion that often comes with childhood (my only memories of the EDSA Revolution are swiping some lechon kawali from the dishes that my family was sending the protesters and that a flying voter voted in my mom' stead during the snap elections), I do feel a weird, slightly detached kinship to the era, via Voltes V cartoons, late night checkpoints and remembering when fruit used to be expensive. We as a nation have, I believe, a love-hate relationship with the ex-President and his wife. My mother for example, is deathly scared of anything that has to do with the military because her father and elder brother was "invited" to Crame for a few months during Martial Law, yet she is a die hard fan of the Madame. It's juxtapositions like this that I attempt to capture in "The Bridge," which is a reworking of an urban legend I heard as a child. Strangely enough, everyone I've asked hasn't heard of this particular story, which makes me wonder if it was something that I really heard, or if it was something I actually dreamt.

Figuring out what to submit. I wasn't actually supposed to submit anything, but Luis suggested I submit "The Bridge," which was up for Vin's dragon anthology. I asked Vin for permission to send it in, he said yes, and I'm happy that it got noticed, and by Neil Gaiman no less! So I have Luis to thank, actually, and Vin, too.

The coolest moment came after, when I realized that Neil himself had picked my story for 2nd place. Also when I was on stage and didn't know what to do, I suddenly felt hands pulling me into a hug and a kiss -- only to find that it was Neil! It's not everyday have the guy who got you through high school (I am proud to say that I was the first girl in my batch who got into Gaiman -- I even got my friends into him!) kisses you in public! Yes, this is a very girly gush-fest but hey, can anyone, male or female, come up with a story about Neil Gaman that doesn't involve any drooling of some sort?