Plug: Tales of Fantasy and Enchantment edited by Christina Pantoja-Hidalgo 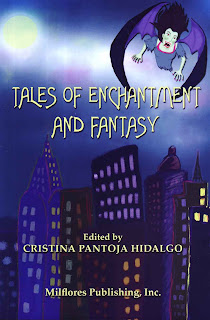 "Tales of Fantasy and Enchantment" is the new anthology edited by Christina Pantoja-Hidalgo (Milflores Publishing, 2008). By next week, it should be available in all National Bookstore and Powerbooks branches nationwide.

Manananggirrrl by Marivi Soliven Blanco
The Sniffles by Carljoe Javier
Some Kind of Noir by Karl R. De Mesa
A Tidy Little Tale by Jose Claudio B. Guerrero
Graveyard Shift by Andrea L. Peterson
Haunted by BJ A. Patino
The Haunting of Martina Luzuriaga by Vicente Garcia Groyon
Monkey Watching by Romina Ma. Gonzalez
Martines by Anna Felicia C. Sanchez
The Stranded Star by Nikki Alfar
The Middle Prince by Dean Francis Alfar
The Sugilanon of Epefania's Heartbreak by Ian Rosales Casocot
Green Girl by Cyan Abad-Jugo
The Gyutou by FH Batacan
Mallina the Lovely by Tara FT Sering
The Other Daughter by Daryll Delgado
Orange by Natasha B. Gamalinda
A Secret Affair with Basti Artadi by Samantha Echavez
War Zone Angel by Emil M. Flores
The Fortune Teller by Gizela M. Gonzalez

I've spotted the book and my only comment is to remember the adage "don't judge a book by its cover". And if you want a preview of last year's winners in Fully Booked's contest, you'll want to check out the book for Ian Casocot's story.

I see what you mean about the cover. It's very YA though. But given the cover trend Milfores has, I'm not surprised...