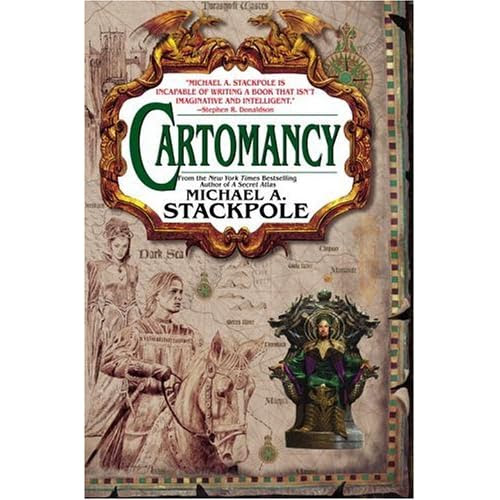 It's not uncommon for the second book in a fantasy trilogy to suffer what I dub the middle-book syndrome--a transition novel that doesn't live up to the quality of the preceding volume but is essential in appreciating the third. Thankfully, that isn't the case with Cartomancy, the sequel to A Secret Atlas, and in fact is more exciting than the latter. This can be attributed to the fact that Stackpole planted the seeds in the first novel and what you get here is all the action and excitement. Moreover, Stackpole has not only mastered the art of integrating various characters and plots but knows when to end his chapters, whetting the reader's appetite and leaving them wanting for more. Another element going for Stackpole is that while this is undeniably traditional epic fantasy, he infuses it with new elements as well as presenting us with complicated and three-dimensional characters. It doesn't hurt that Stackpole's writing is easy to get and his chapters strike that fine balance between long enough to give enough details but brief enough that your attention span doesn't waver. This was very much an enjoyable read but readers be warned, this is a trilogy and you will be left hanging at a crucial moment. Stackpole does for traditional fantasy what great comic writers do for comics: give enough action all-throughout yet end the beat at a juncture where you can't wait for the next issue to come out.