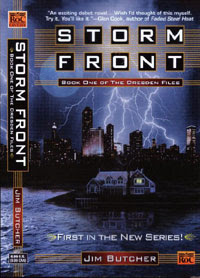 Curious as to what the Dresden Files was all about, I bought the first book in the series. It starts out in a conventional manner, with our protagonist introducing himself and his profession before shit hits the fan and our hero tumbles from one complication to another. For the most part it was an enjoyable read, mainly because Harry Dresden keeps getting entangled in various conflicts and you want to know how he gets out of it. Nothing really ground-breaking here but Butcher does keep you at the edge of your seat. The language isn’t anything special but is quite functional and keeps the reader’s attention. Overall this is a fun urban fantasy romp that is reminiscent of many fantasy-influenced TV shows such as Supernatural or Buffy the Vampire Slayer (and is probably why it has its own TV series). If you want something upbeat and direct, you might want to check out Storm Front.