Guest Blog: Inspiration: When the Chafe Point Strikes a Spark, or what made the idea for a story into the maverick signature for a series by Janny Wurts 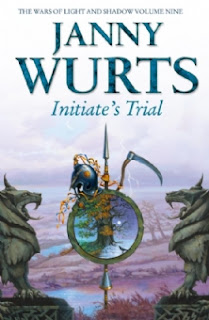 Janny Wurts is the author of numerous successful fantasy novels, including the acclaimed Cycle of Fire trilogy and The Wars of Light and Shadow series. She is also co-author, with Raymond E. Feist, of the worldwide bestselling Empire series. Her skill as a horsewoman, offshore sailor, and musician is reflected in her novels. She is also a talented artist, and illustrates many of her own covers.


A writer doesn’t draw their explosive ideas from the comfort zone. Passionate fire is more likely to flare from the stacked deck of discontent, and the vivid disappointments encountered amid the shattering experiences of life. How better to escape, as a middle child, from two older brothers who were bigger and stronger, and two younger sisters who tended to tattle when the tastier adventures involved a foray into the forbidden? And where better to stray off limits with safety, than to immerse in a work of fantasy? I gorged on faerie tales and mythology, since fantasy then was not as widespread, or as readily available.

Then, didn’t the stereotype grate on my nerves, that over and over again the ‘hero’ was a blond, always handsome and tall, and the bad guy  was the sardonic sneak, inevitably with dark hair? And didn’t it sting, for a young brunette reader, that this profile carried over into movies, cartoons, and at times, even, to prejudice in real life?

I can honestly say that ranting annoyance seeded the original story concept: that the Wars of Light and Shadow would take this maddening, blinded cliché and stand it upside down with a vengeance. Oh, I’d play with the irony – the pretty, charismatic blond HERO-type would appear to hold all the right cards – but with two sides of the argument involved from the start, the little, introspective ANTAGONIST-type would in fact take the readers’ sympathy by storm.

Although the cookie cutter type Quest against a Dark Lord was prevalent at the time, I chose not to write my epic story in cast iron form. Along with the irritation just listed, Tolkien’s world building had set the bar. First thing I set off to build an original world, the history and the setting. Too young to have experienced enough, for me, this also involved biting off an enormous chunk of life experience: I embarked on exotic travel, offshore sailing, period re-enactment –  ‘the epic’ became the excuse to experiment with every possible sort of fun to lend the action a facet of realism. I went overboard – literally – determined to bring the epic battles up to a benchmark standard. This involved research in depth, studying war and tactics from about the Roman era up to the point where gunpowder changed everything. Within the world just created, with about five interlocking approaches to magic, the various periods had to be ‘mixed and matched’ to fit a place and time that is not our earth. I watched movies, spent late nights chatting with historical war gamers, energized on enthusiasm, Earl Grey Tea and sugar high from Coca-Cola.

Then came The Moment – the spark – the life-changing crucible of experience that threw every concept I thought I had into meltdown. I attended a screening of a documentary film on the Battle of Culloden, re-enacted and shot in black and white, and depicted with all of the layers of ‘Bonnie Prince Charlie’ romance, stripped off. No flinching from the horror, as a small, ill equipped band of Scottish clansmen stood in the mud and sleet, being ripped apart as artillery fire pounded them down, from uphill, while their commanding officers failed to give the order to charge. I went into that dark theater naive with conviction, and came out in a head-spinning state of upheaval and shock. Sad to say that nothing in my life had prepared me for the gristly reality that is war.

All the worse, because overlaid on the facts I’d acquired, the horrific realities of The Battle of Culloden Field in fact were no different than any of the other armed encounters I’d studied (Roman era up to the emergence of gunpowder). History as taught in our classrooms was too often glossed over with sanitized lies. The news depicted by papers and networks became exposed, at one stroke, as grotesquely biased and over simplified. Movies, entertainment, and worst of all, epic fantasy  perpetuated the distortion: war as told by the victor and glorified as a heroic endeavor inculcates the concept that might makes right. How tidy, that bloodletting causes are made clear, that one side is ‘wrong,’ the other is ‘better than’ and that the world’s sorry inequities find a just redress.

Left out of the picture: the misery, the brutality, the sheer bloody havoc that repeatedly solves nothing at all – that the winners of any conflict at arms had either: superior numbers, superior tactics, better weapons, or sheer dumb luck. The justifications that survive tell us nothing about what each side gave their lives for. We examine all too little from multiple viewpoints, take little stock of the cultural misunderstandings, and too often choose to turn the blind eye to the inequities never redressed, but glossed over until the nuance got steamrolled with death and ruthlessly eliminated.

Chafe point met spark with an impact that exploded every concept I had in the making. I have never again regarded the news, or a story, or a work of entertainment the same way. Life shifted to a quest to seek understanding, with recognition that right and wrong have many angles of view. Differences are messy, and the  entanglements offered by ideologies fall far short, and truth is not absolute, but many-faceted. Nine volumes later, from Curse of the Mistwraith to Initiate’s Trial, the Wars of Light and Shadows still stretches to sound the heights and the depths. To explore the qualities that comprise a hero, then shift angle, and encounter the very same virtues precipitating a downfall. Balanced thought is about embracing change, and continuously expanding awareness. I can hope that this series, now two volumes from ringing in the finale, continues to break the polarized concept of black and white. That human beings are both good and bad, light and dark, expansive and fallible, selfish and altruistic – and above any other thing, richly inventive.

A series written over decades of life is bound to accumulate other chafe points along the way. Today’s fashionable penchant for grim-dark dystopia surely has sparked a personal backlash. I prefer the stance that loss of hope is ‘the enemy’ rather than the foibles and fallacies of human nature. Let Athera be a world where you might want to live, filled with causes that, but for the grace of knowing multiple sides of a conflict, will not flinch from difficult questioning of the pat answers. May the tables be turned, not once, but many times, and as a last flip off to the laziness of quite a few of my respected peers – let me never EVER rely on the cheater’s tactic of cliffhangers!
Posted by Charles at 8:16 AM