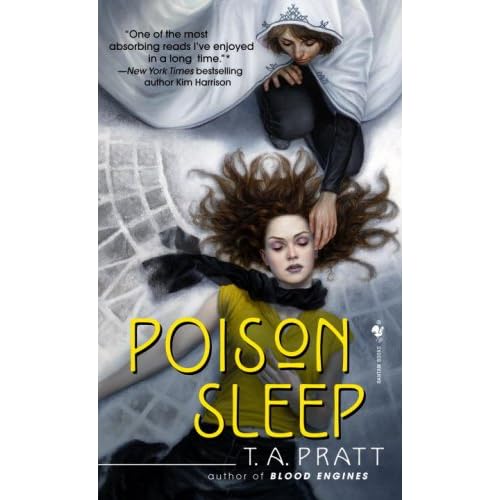 Tim Pratt is an author as well as a poet and currently works as an editor at Locus Magazine. His short story "Little Gods" was nominated for the Nebula Award while "Impossible Dreams" won the Hugo Award. On March 25, 2008, his latest book Poison Sleep will be released under his pseudonym T.A. Pratt.

Hi! Thanks for doing the interview. First off, it's a little late but I want to congratulate you on winning the Hugo for best short story. I was listening to the Strange Horizons Podcast and you mentioned that you didn't even realize you won the Hugo until you started receiving these emails congratulating you. So several months down the line, how does it feel to win the Hugo?

Well, it feels pretty awesome! I grew up reading books that said "Hugo Award Winner" on the cover, so it's got deep and long-standing positive associations. It's an award from the readers, and so it means a lot, as does the Asimov's Reader's Choice Award, which the same story ("Impossible Dreams") also eceived. Just being nominated blew me away, and I was honestly flabbergasted that I won. I was thinking maybe I would place third, and figured even that was wishful thinking. The night the awards were given in Japan I was home in Oakland, and I didn't even bother to stay up late to see the results, I was so sure I'd lose. It wasn't until I received an e-mail reading "Congratulations!" from John Scalzi that I realized what had happened. (Then an avalanche of e-mails followed, and the next night, I drank a lot of champagne with friends.)

You have a new Marla Mason book coming out. Can you tell us more about the series, what's special about Poison Sleep, and whether going by T.A. Pratt has had any effect on you (career or otherwise)?

The series follows the adventures of Marla Mason, a sorcerer with a tendency toward violence and absolutely no self-esteem issues -- she's always sure she's right, even when she's totally wrong. She's sort of a cross between a mob boss and a superhero, pledged to defend the city of Felport from supernatural menaces... and she gets a slice of illegal gambling and smuggling and other action as compensation. The series is being marketed as urban fantasy, which is fair enough, as it does have an ass-kicking heroine... though I confess I was just writing the kind of stuff I always write, and was delighted to be told it fell into a recognizable and good-selling sub-genre! (Though most books in the prevailing urban fantasy mode involve the heroine's love life to some extent, which my series... doesn't. Though Marla does get laid in book two.)

Poison Sleep is the second book in the series, but, like all the books, it stands alone -- that is to say, it's a wholly self-contained story with a beginning, middle, and end, and doesn't require any foreknowledge to read and enjoy. Marla has to deal with the consequences of an escaped mental patient who happens to be an astonishingly powerful psychic. Those consequences include a plague of bad dreams, random transportation to weird bubble universes, and a guy who calls himself the king of nightmares. Oh, and there's an assassin trying to kill her, too.

The "T.A. Pratt" thing was a marketing decision, but I was happy to go along with it. My publisher wanted to create a separate and distinct brand for this series. So if you see the name "T.A. Pratt" you know it's set in the Marlaverse, and that you're in for jokes, violence, and weirdness featuring those characters. Whereas things under the "Tim Pratt" name are more likely to feature, well, jokes, violence, and weirdness, but not with those characters. (Admittedly, the lyric and sentimental modes I sometimes use in my stories, like in "Little Gods" and to a lesser extent "Impossible Dreams," are largely absent from the texture of the Marla novels.)

I absolutely love your short stories and several of them usually deals with myth. Is there any mythology you particularly favor or grew up with?

As in, grew up believing? Nah. I was raised pretty generically secular. I went to church a few times as a kid (Baptist, unsurprisingly,t as I'm from North Carolina), but my family wasn't really churchgoing. If pressed they'd probably say they were Christians, but it was never a big thing. Me, I'm a cheerful atheist.

As for myths I grew up *reading*, I fell in love with the Greek myths early on, and I'd write about them more than I do if they weren't so well-represented in fantasy already. There are tons of stories about the whole Greek pantheon, so in recent years I've been reaching for weirder, less well-traveled material. Still, there are stories in my newest collection about gorgons and harpies and the Furies, so I'm not totally weaned.

Your stories tend to branch out into other genres/sub-genres such as Westerns, super-heroes, science-fiction, etc. Is there a particular genre/sub-genre you'd like to explore more?

Most of my stuff is contemporary fantasy -- that is to say, magic happening in a recognizable contemporary world. That's my favorite playground. I do have a superhero novel I'd like to write sometime, set in the world of my story "Captain Fantasy and the Secret Masters," but it's a long way down on the to-do list.

When did you find out you wanted to be a writer? What did you do to reach that goal?

I don't remember a time I didn't want to be a writer. The first thing I have a record of publishing appeared when I was eight years old. I've been at it pretty steadily since then. I just read and wrote a lot. When I was a teenager I started sending things out and getting rejected. I took some classes, did some workshops (notably Clarion in 1999, the year I finished college), and eventually stopped sucking so badly and began selling work.

You've probably heard this question a couple of times but what books and/or writers are your favorites?

So very many! Greg van Eekhout is a great short story writer (we published a chapbook of his stories), and has an awesome novel I suspect will sell soon. We also published chapbooks by Jenn Reese and by my wife, Heather Shaw, who both write fiction I adore. Christopher Barzak's first novel, One for Sorrow, recently came out, and is awesome. Charles Stross's Halting State is the best science fiction novel I've read in years. Elizabeth Bear's Promethean Age novels are some of my favorites. Matt Ruff is a hell of a writer. At the moment I'm reading the Lord Peter Wimsey novels by Dorothy Sayers, and greatly enjoying them. Seriously, I could go on and on and on. Books are my crack.

You seem to have a lot on your plate, between your writing, Locus Magazine, chap books, and Flytrap. How do you manage to find the time? Which do you prioritize first (at least on the day-to-day basis) and what are the difficulties in maintaining them? What's your schedule like?

Finding time was easier before my kid was born! (River entered the world on November 8, 2007, and changed the whole way I live and work.) I dunno. I can get by on five or six hours of sleep a night. I only work four days a week at Locus, so on Wednesdays I can concentrate on my other work. (I also do freelance reviewing and column writing, about 2000 words a week, every week.) I write fiction pretty quickly. All those things help.

What's it like working for Locus? How did you get the job?

In 2001 I moved to Oakland, for love (to live with my now-wife, Heather Shaw). Had no job and not much in the way of prospects. Heard Locus was hiring, figured I'd be a good fit, and applied. Turns out my boss is good friends with Michaela Roessner, one of my Clarion instructors, and she vouched for me. I got the job! Been there ever since. Now I'm a senior editor, doing a lot of the writing and production work. I've pretty much stopped reviewing books, though. Just no time anymore.

Can you tell us more about your chap books and Flytrap? What made you start them?

I love 'zines and chapbooks! They're fun and cool and weird. I had desktop publishing software, and knew how to use it. So I asked my wife if she wanted to do something crazy, and she agreed. We started doing holiday chapbooks to send out in lieu of Xmas cards, and those were a lot of fun, so we decided to expand and start a 'zine, Flytrap. That went well, so we expanded to doing little single-author collections, of which we've done three. With the baby, I suspect we're going to have to cut back a lot for at least a few years, probably to Flytrap and nothing more. Our next issue is invitation only because we don't have time to read slush right now.

What medium do you find yourself more comfortable with? Short stories, poetry, novels, or editing?

If money were no object, I'd write a lot more poetry. (It just doesn't pay.) I'd be a lot better at poetry in that case, too... I love novels and short stories pretty equally, but in the same way I love, say, spicy chili and vanilla bean ice cream equally -- they're totally different, difficult to even compare, with their own rewards and challenges. Editing is at the bottom. It's not my strongest suit.

Any advice you can give to aspiring writers?

Write a lot, and read more than you write. Push against your comfort zone and try to expand your skill set. When you get rejected repeatedly, consider the possibility that the story isn't ready yet, rather than assuming there's a secret publishing cabal working against you, or that your genius is merely unrecognized. (I thought I was brilliant when I was twenty, but reading the stories I wrote back then? I shudder and blush with shame. It can be hard to judge your own stuff.) Don't keep polishing the same story endlessly; work on it until it's as good as you can make it, then declare it done and move onto the next thing. You'll learn more.

Poison Sleep is the big one! Coming out in April 2008. The third Marla book, Dead Reign, will appear in November 2008. The fourth book, which has no title yet (my preferred title, Grift Sense, was already taken by another writer at Random House a few years ago -- drat!), is coming in April 2009.
Posted by Charles at 5:00 AM