Book Review: The Best Science Fiction and Fantasy of the Year Volume One edited by Jonathan Strahan 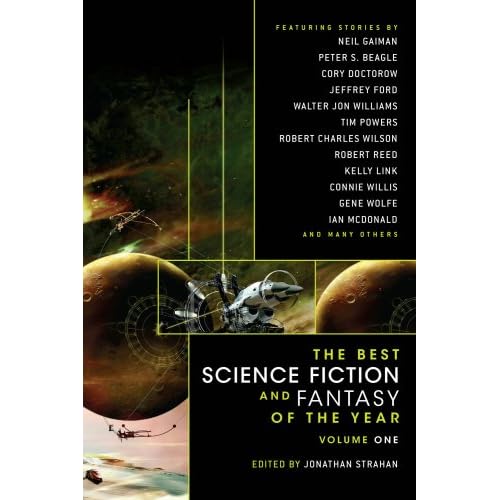 My first and foremost complaint--and this is really a quibble more than anything else--is that the title doesn't tell you what year this anthology belongs to. Which isn't really a problem if you bought it recently but in case you find in the bookstore bin several years down the line, it's nice to know what era this collection is a representative of (in case you don't know the answer, the book was printed in 2007). With that out of the way, this is really a good collection that draws from both the fantasy and science fiction genres and I'm really looking forward to the sequel.

Personally, however, because I've been reading too much anthologies in 2007, many of the stories included here have been reprinted in numerous anthologies. That's not a bad thing per se--and just goes to show how strong the stories really are--but if you're a short story aficionado like me, you might wonder whether you're getting the most for your money. There are two dozen stories in this collection and features several of the remarkable stories of 2006 including "Another Word for Map is Faith" by Christopher Rowe, "The Night Whiskey" by Jeffrey Ford, "A Siege of Cranes" by Benjamin Rosenbaum, "Pol Pot's Beautiful Daughter (Fantasy)" by Geoff Ryman, and "Femaville 29" by Paul di Filippo. The strength of this anthology however is the fact that it combines both science fiction and fantasy genres whereas other collections tend to focus on just one or the other. If you want one meaty book that combines the best of both worlds, Strahan's The Best Science Fiction and Fantasy of the Year Volume One might be the tome for you. With that out of the way, here's my top three stories that I encountered for the first time: "El Regalo" by Peter S. Beagle is this enjoyable story that seems to be aimed at young adults which I find captures well the voice of the youth as well as being marked with a Latin American flavor. "D.A." by Connie Willis is another young adult-like story that's simply fun and exciting, easily the story that gave me the most breathing space in this otherwise heavy and sophisticated collection. "The Djinn's Wife" by Ian McDonald is a well-crafted story that takes you on an emotional whirlwind thanks to the effective characterization and a strong sense of setting by the author, all the while infusing elements of both science fiction and fantasy.

This anthology is a great collection of short stories drawing from both genres and easily lives up to its namesake. If you're a fan of both science fiction and fantasy and could only purchase one book that was representative of 2006, this is the publication for you. Otherwise, it's a great addition to your anthology shelf along with other editors like Ellen Datlow, Terri Windling, Kelly Link, Gavin Grant, Rich Horton, and Gardner Dozois.