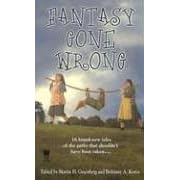 With a title like Fantasy Gone Wrong, you know you shouldn't take this book seriously. This anthology attempts to take the stereotypical fantasy genre in a a different direction, usually with comedic effects. Personally, a bulk of the authors were unfamiliar to me but that didn't detract me from the stories they had to tell. At best, it was a mediocre effort. It's been more than three months since I read the book and all but one story stands out in my memory. It's not like I didn't like the stories, it's just that I didn't love them. The narrative flow was standard-fare fantasy and quite formulaic despite the book's attempt to subvert the genre. Honestly it's a book you might pick up our of curiosity rather than a good laugh or a good read.