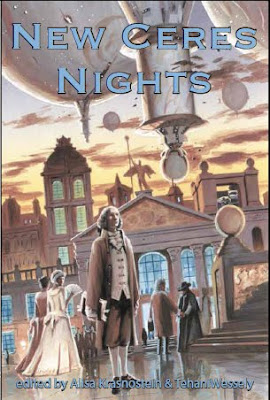 Alisa Krasnostein is the publisher of Twelfth Planet Press.

Hi Alisa! Thanks for agreeing to do the interview. First off, let's talk about Twelfth Planet Press. What made you decide to start the company?

I’ve loved mainstream science fiction all my life but I only really encountered indie press in about 2003/2004 through a friend of mine whose first short stories were starting to get published in local mags. I’d been freelancing as a nonfiction writer and editor for a couple of years and the local indie scene piqued my interest. I joined ASIM (Andromeda Spaceways Inflight Magazine) as a slush reader. Soon after that I started the review website ASif! (http://www.asif.dreamhosters.com) and then joined the ASIM Collective. I learned a lot behind the scenes at ASIM – how to slush read and as well as how to run a magazine. And eventually I thought I’d like to try doing it myself, move in my own direction and pursue my own publishing goals.

Why the name Twelfth Planet Press?

It comes about a bit through an in joke. Twelve planets refers to that period of time leading up to the conference to decide the fate of Pluto – was it a planet or a planetoid? And if it was to remain a planet, two other planetoids might need to be upgraded to planets, one of which was Ceres. We liked the connection to our shared world project “New Ceres” (http://twelfthplanetpress.wordpress.com/contacts/about/projects/new-ceres/) and were backing that camp. Around this time, I was working with Tansy Rayner Roberts and Ben Payne on a magazine. We were throwing ideas around both for the magazine theme and title. In the end we came up with Shiny (http://shinymag.blogpspot.com) and the anthology 2012. And we had “Twelfth Planet” left over and it seemed fitting use it to name the press.

What are the challenges in running a publishing company?

The biggest challenge for me is time. I’m at point now where I am working longer hours on the press than my day job and I still don’t have enough time in the week to get to everything that needs to be done. I hate that I can see the things that slide because of that. I rely a lot on the kindness of my friends and their offering of their skills and willingness to take on tasks to help me out. Without that support network, I don’t think this company would run at all. The other big challenge is distribution. It’s a full time job which I can’t remotely do justice to it at this point in time. The internet helps out enormously with that but it’s still not enough. A third challenge would be cutting through the white noise, competing for time and soundbytes, getting reviewers, readers and booksellThe short answer would be that I like novellas!

Aside from anthologies and short story collections, you're also releasing a novella series. Why novellas?

I am very pressed for time as a reader. I look at the way books seem to be getting thicker and longer and come in series volumes and I inwardly cry. I can’t remotely hope to keep up with that kind of demand from books anymore! Yet sometimes I want more than a short story can offer and so the novella became really appealing to me. As I researched into the form, I discovered a lot of classic books that end up on Must Read Before You Die lists are actually novella length and so the form sucked me in.

From a publishing point of view, the novella is a really useful product. It’s a lot less expensive to produce than an anthology or collection. I can take greater risks as a publisher on the kind of work I choose to buy and publish. I can also offer the reader this risk at a lower price. And for writers it offers a next step, in a way, between the short story and the novel. I see the novella series as a reader’s sampler for both Twelfth Planet Press and the writers we’re picking up. ers to take a risk and even just look at what we are doing.

I just got your Twelfth Planet Press Double, Roadkill/Sirenbeat. It's certainly an interesting format. What made you go this route? What can we expect from this imprint in the future?

The truth is, both of the writers had submitted these stories to me independently and at quite different times and I loved both but had no product to feature them in. The novelette is a tough form because it takes up a lot of space in an anthology but is too short to be a standalone volume. The solution to me was to go the double route which also gave me the opportunity to riff off the old Ace Doubles that so many people remember so fondly.

I have a couple of exciting volumes currently in development for 2010. I’m specifically looking for really strong, powerful works that also showcase writers I’ve had my eye on for the last couple of years and from whom I think we can expect good things in the not so distant future.

You're also savvy when it comes to the Internet, such as having a social networking presence. How does this factor into Twelfth Planet Press's business plan? Are there other formats (i.e. eBooks, podcasts, etc.) you're thinking of pursuing in the future?

The Internet forms a really large part of the current plan – not just for promoting and marketing and exposing readers to our books but also in keeping up to date on the publishing industry, on what people are reading and on what other publishing houses are doing. We recently started offering some of our books in ecopy via Smashwords. Being outside of the USA makes it virtually impossible to get onto Amazon in our own right. But I’ve been really impressed with the development of Smashwords both in interfacing with them as a publisher and also in terms of their distribution and links. We’re currently working on a Twelfth Planet Press podcast. And I’m quite interested in Fantasy Magazine’s new iphone App. I think that the publishing industry is evolving and I’m interested in seeing in what directions it will move.

How has the Internet made a company like Twelfth Planet Press viable? How about hurdles to overcome?

Twelfth Planet Press would not be viable without the Internet. A large proportion of our sales come via the Internet. I think the Internet enables likeminded people to find each other by breaking down the tyranny of distance. Readers who are interested in the sort of material I publish are also the kind of people who will seek out these kind of works and aren't afraid of the Internet.

As both a publisher and an editor, what do you look for in a story?

As an editor, I let the reader in me choose the stories I buy. I buy the stories that resonate within me, that demand that I think, that challenge me on ideas and/or that move me emotionally in some way. I look for stories that mean something, that say something or that stand out in some way, that are unique or give a unique slant on something done to death.

As a publisher I want to buy stories that I think will sell. I read a lot of the current publications to keep my eye on what is being published and where. I try to stay away from what is the current trend and look for other kinds of stories. But most of all, I look for really well written, tight stories. Because you can’t beat quality with just a good idea.

What's in store for Twelfth Planet Press in 2010?

I’m currently working on an anthology called Sprawl which will showcase the leading Australian short story writers. This anthology has a strong Australian voice and is filled with stories about Australian suburbia – all the different kinds that exist across the country, from Hobart to Brisbane, and Sydney to Perth.

Our first novel is due out – Robot War Espresso by Robert Hood, a young adult science fiction story featuring, well, coffee and robots at war.

And I’m working on two novella doubles out and the sequel to Horn for release in the year.

You've very passionate about Australian speculative fiction. How would you describe the field there?

I think there are pockets of really exciting activity going on. A lot of Australian specfic writers are concentrating on writing novels at the moment. For the short story editors it feels a little bit lean as many of the regulars have moved onto exciting novelist careers. There are currently a lot of Australian specfic novels being released and I think it’s a really exciting time for the fantasy novel here. A lot of our up and coming writers are … up and coming. I think we’re in a transition period with some really exciting new and fresh writers emerging.

Do you think there are specific qualities to Australian fiction that sets it apart from the rest of the world?

I’ve often read that Australians blur the genres of science fiction and fantasy more than American readers would like. As an Australian reader, I’m not sure why that’s a bad thing. I like the Australian fiction that is hard and rough and paints worlds that are too bright for your eyes – stories that reflect the harsh Australian environment. I think there are also some really strong works that make honest commentary on the politics and current affairs of the day.

In your opinion, who are the Australian writers/editors we should be looking out for?

Keith Stevenson remains a captivating editor, having released X6 in 2009 – a novellanthology which included one of the standout stories of the year, “Wives” by Paul Haines. I’m eager to see what Stevenson does next. He also hosts a monthly podcast called TISF which is well worth checking out as it includes one short story read by the author in each episode and a review of a new Australian work.

How did you find the time the juggle all your projects?

I don’t sleep as much as maybe I should. And I should exercise more.

What advice do you have for aspiring publishers?

The number one piece of advice I wish I was given when I started up is – take yourself seriously and approach it as a small business from the very beginning. Learn about money and set up a solid financial tracking system before you start dealing with sales and payments. And take advice on contract writing. A good website is the most important promotional tool you will ever invest in – if customers can’t find you, can’t buy your books or can’t find out information about you when they do find you, you’ll miss a sale and you won’t be taken seriously.

Now is a great chance to sample some of the award nominated works from 2009 in Australia. Twelfth Planet Press is offering free e-copies of Horn, A Book of Endings and Siren Beat through the month of February (http://girliejones.livejournal.com/1544355.html)
Posted by Charles at 6:00 AM