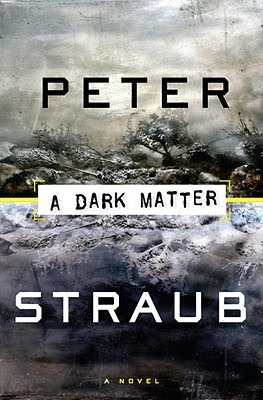 I'm still in my reading slump but I managed to sneak some time reading A Dark Matter. Peter Straub's writing is so powerful that the book continued to haunt me even when I've put it down.

There are several elements that make this a successful book. If we want to analyze it clinically from a writer's perspective, Straub has mastered all the fundamentals. Take for example the principle of the strong opening: this one hooks you immediately. At first glance, it's strange to begin a novel in a scene which has no bearing to the overall narrative plot-wise but in this instance, the inclusion of the bizarre--and perhaps coincidental--grabs the reader's attention and is the perfect excuse for the author to delve into the meat of the story.

Another aspect that Straub excels in is dialogue. What's obvious is how he manages to create distinct character voices and tones, and that's a challenge when you're diving into the mindscape of multiple characters. Granted, some leave a stronger impression than others, but A Dark Matter isn't necessarily about balance. One character I'd like to highlight is Hootie. Conceptually, he's an easy conceit to imagine: a character whose dialogue is entirely composed of quotations and allusions. A reader might think he is one of the simplest character's to create but when you think about it, writing such a character is actually very difficult: you'd have to research all the novels Hootie references unless you've memorized them by heart. It doesn't help that Straub's portrayal of the character is seamless and organic, reinforcing the illusion that Hootie is a quick and easy fabrication.

If we dig deeper into Straub's dialogue however, one realizes that this makes up a good portion of the book. Again, this is where Straub's mastery of the craft comes into play as he writes conversations that are as riveting and exciting as any fight or suspense scene. A lot of the conflict and characterization is conveyed through dialogue and the effect it has upon the reader is subtle yet potent.

What really impressed me however is the reader's complete immersion. There were numerous times when I was wondering whether this was a thinly-veiled autobiography by Straub. It's one thing to know that it's not, but as one digests the text, it's a possibility that repeatedly asserts itself. In that sense, this works as a fictional memoir of sorts, and how it eventually wins over the reader's sympathy.

What's tricky about reviewing A Dark Matter is that it's a layered and complex novel, and one that takes risks. Let's first talk about one of the riskiest scenes in the book: Right from the outset, Straub foreshadows that the final narrative would culminate with the narrator's wife, the Eel. The daring gambit with Eel's scene is that during her epiphany--and this is an epiphany that can get didactic as it wraps up the loose ends of the other narratives--she encounters a demon that's both heavily accented and loves books. The former quality I can imagine turning off some readers who simply find the situation too preposterous. And yet one could argue that this is Lee's mindscape and imagination, and fits the unreliable narrator motif that is prevalent throughout the novel. As for the latter quality, it might seem indulgent at first glance that our demon also happens to be a bibliophile, but if we dig deeper into the themes of the book, it fits with what Straub is attempting to accomplish. And here is where Straub's sleight of hand comes into play.

On the surface, A Dark Matter could be read as a personal story about morality: the narrator investigates a cult ritual that involves his friends and results in the murder of one of them, as well as the effective dissolution of the group. As we progress through the narrative however, new facts emerge and what seems like a black-and-white scenario transforms into one that's filled with shades of gray. It's a very human story, one that I'd label as literary, and what compounds its effectiveness is the constant juxtaposition of objective evil versus subjective evil.

A reader could also tackle A Dark Matter through the lens of post-modernism and the metafictional narrative. Straub has been using various literary frameworks, and while it's most transparent in select characters--the narrator who is an author himself, Hootie who quotes literary work, and the bibliophile demon--it's a paradigm that can be applied to the entire novel. There is, for example, the concept of conflicting narratives and points of view. Ryunosuke Akutagawa's "In the Grove" highlights this disparity but Straub takes it to another level here, not only due to the length, but by adding morality into the mix and increasing the ambiguity. There is also the relationship between memoir and fiction. Most people assume that just because it's nonfiction automatically means that it's real. But the fact is, both fiction and nonfiction are stories that we attach a narrative to, and there are details in which we might be mistaken or fabricate. That A Dark Matter is presented as a fictional memoir says something.

While no English Literature degrees are needed to enjoy A Dark Matter, Straub's latest novel is a definite heavyweight that genre and non-genre readers alike must read. This is a refreshingly ambitious book that constantly catches readers off-guard and actually delivers on its promise.
Posted by Charles at 6:31 AM

I'm intrigued. Yet I am left wondering if the book alludes to the physics theory of dark matter. That question aside, the idea of evil vs. evil (objective & subjective) is interesting.