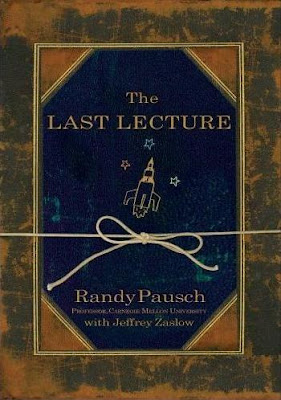 What finally piqued by curiosity when it comes to The Last Lecture were two things: the concept of an actual last lecture (the author, a professor, had an estimated three to six months to live), and the fact that it had been on the best-seller list for several months (and since I used to regularly post USA Today's best-sellers here on my blog, I learned pretty quick how to spell Pausch). This is obviously one of those inspirational books so I braced myself. I didn't know whether this was actually worth reading or not but the book was rather thin (at least compared to the fiction that I regularly read) so I thought I'd go through this pretty quick.

I think whatever doubts I had about the book was quickly dispelled in the introduction. It was simply two pages yet the first line, "I have an engineering problem," immediately hooked me and Randy Pausch manages to live up to the metaphor. It is also here that he admits that Jeffrey Zaslow helped him with the writing and I think it shows. Despite the non-fiction or inspirational category of The Last Lecture, there's a tightness and narrative to it that catches your attention in much the same way a good novel would.

For example, the first chapter starts out with the conflict: Pausch's wife, Jai, doesn't want him to do the last lecture because a) she wants him to focus the remaining time he has with his family and b) his flight to the university where the lecture takes place happens to be scheduled on her birthday. It's actually an awful dilemma to be in Pausch's position and this is what hooked me as a reader. (What finally won both of them over was that the lecture would be a DVD for their kids and my thoughts was that by the time the kids are old enough, DVDs would be antiques compared to whatever replaced Blu-Ray by then. Thank god for YouTube.)

This book actually isn't the lecture itself more than appendages to the lecture. We get a behind-the-scenes look behind what happens before, during, and after the lecture. It's structured so that you don't need to watch the lecture itself and again, there's a solid narrative structure here. For example, chapter three is titled "The Elephant in the Room" which refers to the author's pancreatic cancer. There's a big payoff in chapter ten when we return to the elephant metaphor as one of the lecturer attendees, a girl with cancer, picks an elephant stuffed animal which Pausch was giving away. There are several seeded scenes like these which elevates the book beyond simply giving straight-forward advice. It's also neatly divided into six sections, each section focusing on an appropriate agenda.

Most of my complaints is that when we come to the fifth section, the entire narrative structure falters. Whereas all the other chapters are neatly connected, this section is filled with random anecdotes which simply give advice. Not that the advice is faulty mind you. It's a mix of practicality and some cliches (Pausch admits that he likes cliches). If the other chapters were parts of a novel, chapter five is akin to throwing a series of short stories just before the concluding chapter. Still, this brief break from the main plot serves to make the final section all the more relevant.

I just watched the video and there are honestly a few points in the book that aren't too clear, or at least you need to re-read to understand, that would have been a lot more comprehensible had one seen the lecture.

Obviously, this is an inspiration book so that basically sums up whether you want to be reading this or not. As far as I'm concerned, The Last Lecture was an enjoyable read and well-written. It's not particularly life-changing for me but I do have some new quotes now which are relevant for the struggling writer. Here's my favorite one: "The brick walls are there to give us a chance to show how badly we want something."
Posted by Charles at 3:43 AM

Would've been nice had they included a CD of the lecture. (Para sa tamad mag YouTube, like me, hehe.) I haven't seen this book around, is it available locally?

enjoyed reading your review
i forgot that he did infact admit he enjoys cliches :)

i was having lunch with a colleague and she said she was so angry at her 7 year old drawing on her bedframe. i was reminded of how he was allowed to draw on his wals and i had to bite my tongue :) i have no kids afterall. i doubt mommies would appreciate my unsolicited advice.

Although I knew there was a video of the same lecture in youtube, I being interested in becoming a reader rather than a viewer, bought this book and now suggest this book to everyone who want to read and connect to some of the author's anecdotes with those of your life, That being aside, i feel that this book is a good read because it comes from a person who really has lived his childhood dreams and enjoyed giving guidance to many others, with a headfake revelation at the end....