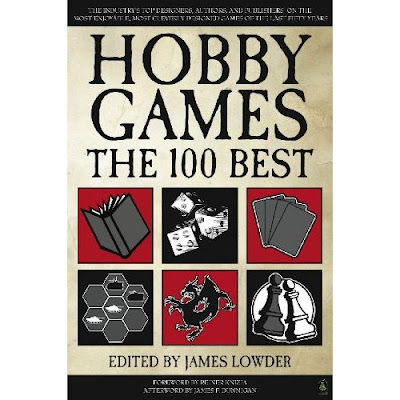 Hobby Games: The 100 Best is a collection of essays on various tabletop games written by various game designers, authors, and publishers. Each essay is only a few pages long and focuses on what makes that particular game compelling. One could perceive this as one big propaganda book for gaming but honestly, what else would you expect from a title like Hobby Games: The 100 Best?

For the uninitiated, there have been innovations in the gaming industry that goes beyond Monopoly, Scrabble, poker, or chess. This book attempts to enlighten readers, both those familiar with the field and newcomers alike. There are over 100 contributors in this book and their essays employ various styles and techniques. Some take on the persona of the game they're talking about while others, honestly, is competently written but are vague on a few points. What they all have in common however is that they all attempt to summarize the game they're talking about. Hobby Games: The 100 Best could easily be labeled as "Abbreviated Rules to 100 Games". Is that a bad thing? No, it's great a great way of showcasing a game without actual playing it.

Because of the book's agenda, there will be two kinds of readers. Those who've played the games listed here and those who haven't. I'm mostly coming from the latter. While I've certainly played some of the games listed here, the bigger thrill is reading about these games you might have heard of in gaming circles but never personally experienced. And then there are those games which you're ignorant of and hearing about them for the first time here (and since there's a couple of self-published games in the list, that's a likely possibility). In that particular aspect, it succeeds as a gateway drug.

I've also played some of the games listed and after reading the essays, it's rejuvenated my interest in those games--making me temporarily forget a game's shortcomings (damn you Talisman!). Not that the list is perfect, and like any list, there will be some choices which you might disagree with, but overall, it's a good list to start out.

As a gamer, it's also exciting to read the views of legendary designers, especially some who've passed away such as Gary Gygax or Erick Wujcik. The book does double duty in not only enlightening readers about the games mentioned, but introducing to us the various personalities in the hobby field, whether it's game designers or authors. There are also two fantastic essays at the end, one being a secret history of hobby games, the other a brief guide on how to find the games mentioned in this book.

Hobby Games: The 100 Best isn't without its flaws. Some of the games mentioned will be difficult to obtain, either logistically or financially. And if you're looking for perspectives on these games from the female gender, well, you're out of luck.

Having said that, this is still a fantastic introductory book. Gamers might tell you "research this game on Boardgamegeek or RPG.net" or some other website which requires time and effort if you're not familiar with the interface when they should really be saying "read this book." Even veteran gamers will find something of interest here to pique their curiosity.
Posted by Charles at 8:13 AM