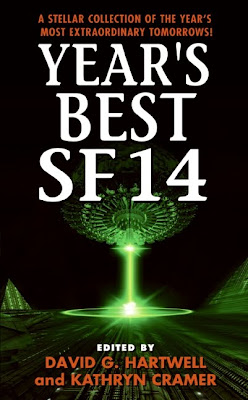 The dilemma with anthologies that label itself as the "year's best" is that tastes are subjective and as a reader, what you're really looking for is an editor (or editors in this case) whose preferences coincide with yours. It's probably both a boon and a curse that there are only so many such anthologies in the science fiction genre that the real challenge is making a selection that has little overlap with the others but nonetheless delivers a satisfying read. If it's just satisfaction that we're looking for, Year's Best SF 14 succeeds in the sense that I enjoyed most of the stories. Did I think they're the best of the best? Well, some certainly are, in the case of Ted Chiang and Paolo Bacigalupi. The rest, on the other hand, are undeniably good, and definitely fun, but whether their slot in this book is irreplaceable is up for debate. Having said that, David G. Hartwell and Kathryn Cramer are still ahead of the curve and their choices are worth a look.

The introduction covers the anthology's mission statement and this is important in any anthology. In the case of Year's Best SF 14, Hartwell and Cramer wanted fiction that is undeniably science fiction (as opposed to something interstitial) and looking at the table of contents, I'd say they live up to that promise.

Personally, what impressed me with this anthology is that the table of contents was filled with familiar stories but not all of them grabbed my attention the first time I read them from the primary sources. Revisiting them here, however, gave me the opportunity to reassess my opinions and more than a couple times, I was swayed by the re-reading.

For example, I liked Paolo Bacigalupi's "Pump Six" but felt it lacked that extra oomph when I initially encountered it. The re-reading however made me appreciate the author's technical skill which I previously missed. The first paragraph for example conveys so much in such a short scene and this is where the author's strength comes in: his characterization and his ability to make his protagonists sound genuine and true. The rest is icing on the cake: how Bagicalupi spins a simple concept into a believable dilemma on the micro-level (as opposed to the macro-level which is how many science fiction authors revolve their conceit on), the richness of his setting, and the level of detail that'll make literary professors weep.

Ted Chiang's "Exhalation" is both a compelling and enjoyable read. It might not be his best but Chiang's "good enough" is better than a lot of what's out there. Tone is important to Chiang's narrative and this one is consistent allthroughout, taking its time but nonetheless hooks readers. It's clearly a concept story but one that works on multiple levels. Even veteran readers will appreciate the influence of Isaac Asimov's The Gods Themselves but still remaining fresh and apt.

The rest are impressive stories although deciding which is better is difficult. What I did appreciate was how the shorter stories managed to deliver an impact despite their brief length, such as Michael Swanwick's "The Scarecrow's Boy" which strikes the balanace between horror, humor, and nostalgia. Daryl Gregory's "Glass" is also noteworthy despite its brevity as the author distills the core elements of both science fiction and horror into a piece where every sentence matters.

No disappointments in reading--and purchasing--this anthology as Year's Best SF 14 will satisfy SF readers. There's a mix of essential reads along with some leeway for indulgences.
Posted by Charles at 6:57 AM