Book/Magazine Review: The Lord of the Sands of Time by Issui Ogawa 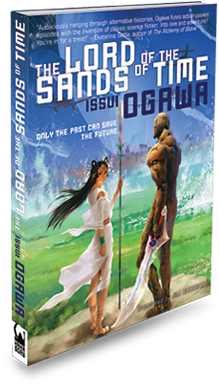 At first glance, The Lords of the Sands of Time seems to follow the formula of many translated Japanese light novels--it's slim and the language is functional, with little care for establishing atmosphere or description but focusing more on the plot. That's not necessarily a bad thing, mind you, especially if you're the science fiction reader who's looking for a concept book along the lines of Bernard Beckett's Genesis. A lot of the characterization is conveyed through dialogue and the pace of the novel is quick.

Underneath its exterior however is a well-crafted book. Issui Ogawa for example alternates between the past and the future, using the former to propel the story while the latter to explore the motivations of the main character. What initially seems like a simple story soon evolves into a complex tapestry that is reminiscent of of Joe Haldeman's The Forever War and Hayao Miyazaki's Mononoke Hime. Ogawa even dips his toes into metafiction as a children's story is included which mirrors the narrative in addition to providing a clearer metaphor of events. One of the conceits I'm impressed with is how the aliens are named after Japanese creatures, a technique that spares the author from creating his own jargon and spending much time describing them to readers.

Overall, this was an enjoyable read that defied expectations. It's compact and very concept-driven, touching on many classics of science fiction while still remaining fresh and original. Perhaps it's not the most groundbreaking book out there, but it's well worth the investment in time.
Posted by Charles at 6:59 AM