Book/Magazine Review: All You Need is Kill by Hiroshi Sakurazaka 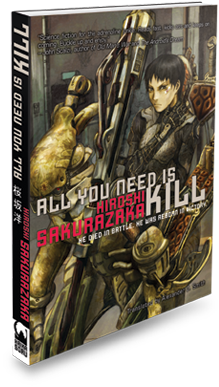 There's a tendency for books with rebellious teenagers to include profanities for the sake of establishing tone and voice. Initially, All You Need is Kill feels like such a novel but once you get past that aspect, you end up with a compelling adventurous read that's one part military SF and one part emotional roller coaster.

Hiroshi Sakurazaka's writing style is a good contrast to the other Haikasoru writer, Issui Ogawa. While the latter simply focuses on his plot, the former spends careful time establishing his setting and the various characters. And despite the many science fiction concepts presented in the book--especially the unique "aliens" that the human race fights--Sakurazaka aims for a story with emotional resonance, focusing more on the characters and their situation rather than the technology surrounding them. This becomes quite evident as the four parts of the book are named after different characters and report on their perspective.

There were several times when the writing feels repetitive but it also feels apt considering the thrust of the book, the science fiction equivalent of Groundhog Day. Still, Sakurazaka also knows when to be brief and there are several scenes which are only a sentence long but conveys to the reader the necessary information. In many ways, this is a well-conceived book but it's not perfect. Whether All You Need is Kill is good or not depends on whether you're persuaded by the author to invest in the characters. The romance at the end, for example, felt abrupt for me, and could have been elaborated more beforehand. Still, this was a decent and quick read, and tickled this reader's fancy.
Posted by Charles at 7:02 AM

I'm tempted to buy it for the title and cover alone.