Book/Magazine Review: The Art of Fiction: Notes on Craft for Young Writers by John Gardner 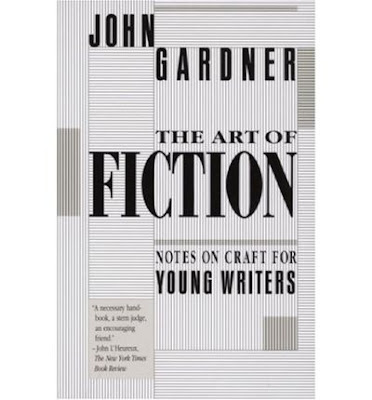 Books that deal with the craft of writing can be tricky. On one hand, we have memoirs such as Stephen King's On Writing which is an enjoyable reading experience, but leaves much to be desired in terms of practical advice. On the other hand, we have the much praised--or maligned--The Elements of Style by Strunk & White which is monotonous and narrow in scope. The Art of Fiction by John Gardner is unlike any of those two books and that's probably a good thing. What this book does right is that it discusses the writing process, not simply a sentence or a paragraph, but an entire story and the decisions we, as potentially great writers, decide.

The Art of Fiction is divided into two parts. The former deals with theory and here Gardner explains much of what is expected from the writer and the reader. The second part is the instruction segment of the book and here Gardner gives practical advice and exercises on how to hone one's craft. Initially, Gardner's writing can be intimidating as the text is lengthy (and in retrospect, it could be improved by breaking the segment into smaller chunks) but underneath it is wisdom from a writer who's not only talented but can actually teach. In each aspect of the craft, Gardner gives specific examples and quotations, and in several instances, actually builds a story from the ground up and points to possible options a writer might consider. A wide subject matter is tackled, whether it's the basics such as plot, or subtle techniques such as tone. What's different with Gardner is that he seldom espouses one typical technique and acknowledges the fact that there are some rules which are meant to be broken, and that a story should be taken in its own context.

Another notable aspect of the book is that Gardner treats his readers as intelligent and well-read. There are allusions to numerous books--standard curriculum of any literary major--but there are enough context clues or quotes so that readers unfamiliar with them will understand the author's point. What's deceptive about The Art of Fiction is that while it's an instructional book, one catches glimpses of Gardner's writing genius through the various examples he gives. The author makes it look like writing good fiction is easy and seamless, and perhaps that's the goal the reader should strive for, with practice. At the end of the book are some writing exercises that factors in a lot of what's discussed, and its merits depend on whether the reader actually does them or not.

My major was in Creative Writing and this is one of the books I wished I had read during that time. Gardner has a systematic and conscious approach to writing that's missing from the professors I encountered, or books on writing for that matter. The Art of Fiction makes some fundamental assumptions--that the reader has a firm grasp of grammar for example--but once you meet that criteria, this is an insightful read to prospective writers and manages to be b oth exciting and practical.
Posted by Charles at 8:35 AM

Lovely review to just happen upon, thanks.

Great review. Gardner's book was the very first book on writing I ever read (at the recommendation of a very astute librarian). He provided a very solid foundation for the budding writer. In the years since picking it up for the first time, I've returned a few times to refresh myself on his thoughts. Always worth the effort. I've read a lot of writing books over the years but I still think this one is one of the best. My copy is earmarked, marked up with highlighter, sections annotated, circled and underlined. Good stuff. Glad to know there are others out there who get it.