Book/Magazine Review: The Writer, The Book, The Reader by Zoran Zivkovic 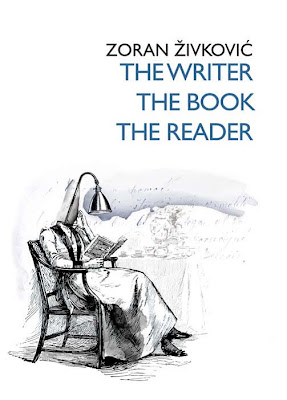 The Writer, The Book, The Reader are three narratives combined into one package. The Writer is a novelette dealing with the trials of an author and his annoying friend (who is also a writer), The Book a humorous piece almost the length of a novel that is best described as the ultimate personification of a book, and The Reader compiles several short stories into a larger mosaic. While each one is impressive in its own right, compiling them into one book gives you much value whether you're a die-hard fan of Zoran Zivkovic or a casual reader.

I'm actually quite deceived by The Writer. Obviously, it makes no pretensions that the narrator is an author of some repute. There are times when I am wondering whether this is Zivkovic himself or simply a literary simulacrum entrenched in the most ludicrous of situations. What gives life to this story isn't the narrator's author persona but his interactions with his friend. On one hand, the idiosyncratic author-friend who perceives himself as a talented writer (but isn't) sounds manufactured but on the other hand, it's not like I don't know such personalities in real life. And perhaps that's the talent of Zivkovic here, that he dangles in front of you compelling conflict that you're not quite sure is fiction or non-fiction (or if you would, believable fiction and unbelievable non-fiction). Zivkovic digs deep into the psyche of the most troubled author and much like witnessing a car wreck on your daily commute, one can't avert their eyes from the text. It's too spectacular to turn away from and it helps that the narrator has sarcasm and wit.

The Book on the other hand is more complex. The proposition here is what if books were sentient in the way Descartes would define it and suddenly, we have a situation where everything that is praised in the world of bibliophiles comes out as villains: the printing press is abhorrent for it unethically clones intelligent creatures without their consent; the library is a brothel where the books are compared to prostitutes; bookstore customers are equated with pedophiles as they purchase the "young" and recently-released books. I'm sure my examples do the narrative no justice and one must read it to appreciate the seriousness of the narrator. While anyone might come up with such a concept and execute it in a short story, what is truly surprising is the length in which Zivkovic manages to sustains it.

Admittedly, there's a point where Zivkovic falters in his analogy so he diverges into the territory of the book publishing industry, from the concept of book awards to the entire process of publishing. Again, there are humorous jabs at the life of a writer and while this section veers away from the book as narrator, the tone and comedy is retained, making for a welcome if inconsistent break. While The Book might be criticized as masturbatory with its constant topic of bibliomania, I found the writing to be funny and light in addition to being quite accessible. If it all boils down to execution, Zivkovic is a master.

The Reader is a series of short stories featuring the same character, a Miss Tamara who is fond of reading books. Each story is titled after a fruit and the said fruit somehow plays a role in the narrative. Much like many of Zivkovic's fiction, there's usually a strange premise in each piece that tends to be minutely bizarre that makes it inconspicuously believable but definitely tickling one's sense of wonder. What's interesting with this suite is that each story features what seems to be a parallel-world Miss Tamara as the events of the preceding piece has no bearing on the next... until we read the culminating story "Fruit Salad" wherein Zivkovic ties up the mosaic.

Again, The Writer, The Book, The Reader is a clear winner for me and features the diverse talent of Zivkovic. The Reader I feel is the traditional if somewhat formulaic Zivkovic but the other two sections significantly vary in tone and technique that they offer something different to Zivkovic fans. The author doesn't fail to amuse or excite and using what little he's given, creates a vast and wondrous atmosphere.
Posted by Charles at 5:31 AM