Book/Magazine Review: Camp Desolation and an Eschatology of Salt by Uncle River 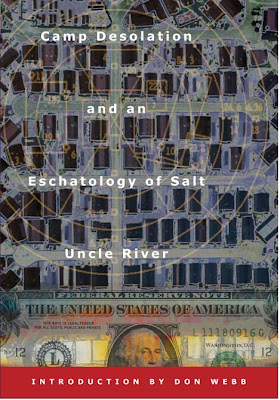 Camp Desolation and an Eschatology of Salt is anything but a conventional narrative, or at least what the modern reader expects. Uncle River sums it up best in one of the lines later in the book: "Yes, I know the writer’s dogma: “Show, don’t tell.” I could use that thriller to bring characters to life. but it’s still the wrong story." Not surprisingly, there's a lot of exposition here. Which isn't to say the book doesn't work. Strangely enough, it was a quick and entertaining read, although had this been written by someone else, there would surely be complaints about the lack of characterization and too much preaching.

For the most part, this is a political novel, more of a commentary on the current times rather than simply an attempt at crafting another American dystopia for the sake of doing so. It's not trying to be 1984 and whether you love or hate Camp Desolation and an Eschatology of Salt (yes, it's that kind of polarizing material), it's certainly unique. There's a certain paradox with River's writing. On one hand, the book starts out with a great beginning as the author simply says enough to pique your interest. On the other hand, there's not a lot in terms of action or dialogue or other conventional techniques. Perhaps what keeps your attention is the dry humor and the sarcasm. For example, there's a quip about car insurance when no one in the dystopian society can afford a car.

River channels the shades of American's current fear: economic bankruptcy. Bush's era may be over but the threat of the weakening American dollar looms over us and the author tackles that subject matter along with global warming, the Cold War, and a host of other factors which are both scientific and agenda-driven. Does it work? Early in the book, River can get quite repetitive but this pans out eventually. There's also a wonderful twist here because while most books tend to focus on one character and tell the big narrative from there, this one does the opposite. There's a central character, Shandra Stuart, who allegedly attempts to blow up Panama with a nuclear bomb and we witness broad strokes of her life rather than the street-level storytelling most writers are advised to use. This story however isn't really about her more than it is about her society. Again, River drills this into us with exposition, exposition, and exposition and while I'm not a fan of such technique, it somehow works.

So, is Camp Desolation and an Eschatology of Salt worth reading? Again, because it breaks many writer rules and due to the seeming excess of exposition, I feel readers will either love it or hate it. I'm more on the former group and this was an enjoyable read although perhaps not necessarily on my must-read list.
Posted by Charles at 5:14 AM