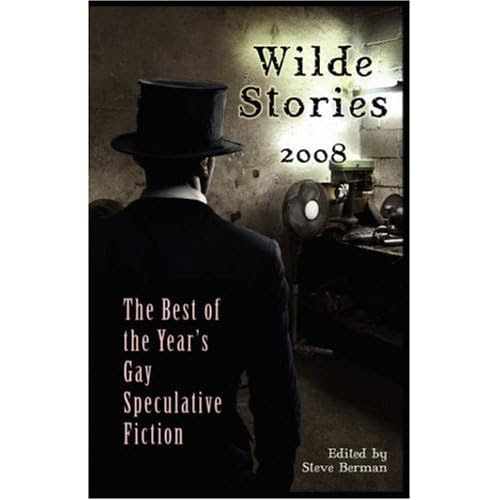 I'm interested in all things speculative fiction and so I eventually got around to reading Wild Stories 2008 which for me is conceptually fascinating. Of course in reviewing the book, there are two stances to take. Either I could read this from a gay fiction perspective--something which I have no experience with since I don't really read gay fiction--or from a speculative fiction perspective, that of a casual fan. I decided to write this review from the latter since it's what I know best and perhaps to show that you don't have to be gay to appreciate such an anthology.

For the most part, I found Wild Stories 2008 to be enjoyable. This is a relatively quick read with eleven stories plus Steve Berman's introduction and there are no bad stories in here, although there were one or two that I found to be simply mediocre. One aspect I liked about this collection is that it breaks the misconception of what gay fiction is about. It's not about men having sex but simply stories about characters. For example, the opening piece, "The Woman in the Window" by Jameson Currier, is a story about a person who is concerned about his family, period. The fact that it has both gay and speculative fiction elements add to it rather than simply being a token detail which was added to cater to a niche. "Acid and Stoned Reindeer" by Rebecca Ore on the other hand is simply wild and slipstream and the fact that it had a gay character was the last thing on my mind.

Again, there's a couple of stories that I liked in this anthology but the ones that really grabbed my attention were towards the latter end of the book. This isn't the first time I encountered "An Apiary of White Bees" by Lee Thomas and it certainly stood out back then. Thomas writes good horror with the gradual build-up and effective use of flashback. The ending shouldn't come as a surprise but the author uses good technique that the climax is savage and brutal as intended.

"The Island of the Pirate Gods" by Hal Duncan on the other hand is an ensemble. For starters, there's the tone which is consistent and funny. Lurking beneath the comedy is a heart-wrenching and action-packed tale that immediately reels you in despite being one of the longest stories in the book. There were numerous scenes that caught my eye as well as lines that are only possible in a melding of two genres such as "...there was more salt on that ship shared between the saucy sailors than there is in the sea herself." Without a doubt this is the best story in the anthology.

"Ever So Much More Than Twenty" by Joshua Lewis probably isn't the best-written story here but it nonetheless has its own charm. You can call it a guilty pleasure but I like its optimistic bent without being too sanitized or completely resolved. Like many of the stories in the anthology, Lewis focuses on character and sympathetic dilemmas such as parenthood or the passing of youth. What I found particularly commendable was the voice of the characters, especially the teenager who did sound like an actual teen.

Personally, Wild Stories 2008 isn't a must-buy, especially when compared to the other "best-of" anthologies, but I do think it occupies a necessary niche and draws stories from sources that the casual speculative fiction fan might overlook. It broadens the scope of what speculative fiction is, and from the perspective of the casual fan, that gay speculative fiction fiction can be fun and entertaining (or that you've been reading it all this time and never noticed).
Posted by Charles at 7:43 AM