Essay: A Quick Run-Down on Bookstores in the Philippines Part 3

Amidst the doom and gloom of the demise of reading, secondhand bookstores are showing promise and steadily expanding. If the 1990s was the boom for independent bookstores, then the current decade belongs to this cottage industry as several franchises have popped up (four new franchises in less than six years!). What I'll be covering are the franchise shops, as opposed to each individual seller than deals with secondhand books (they're too many to mention and I'm honestly not that familiar with them).

Easily one of the oldest franchises in this category, when you speak of secondhand books, the first store that comes to mind is Booksale. Quality varies from branch to branch, with some stores having a shelf for various categories, others simply lumping the books in one big pile. Many classic and hard to find science fiction/fantasy books have been found in Booksale, as well as elusive magazines like Asimov's or Ellery Queen if you're lucky. Paperbacks seems to be their specialty although they have their own sections on hardcovers and text books.

Of course bibliophiles would be wise to pay attention to the other material that Booksale actually sells. Current magazines seem to be a staple (FHM glossing their front stands beside Sudoku puzzle digests) and small forays into school supplies like ballpens. For a time, they were also selling encyclopedia-like books (there was this multi-volume series on World War II) cheaper than what they cost in the regular bookstores.

Branching out from its parent company, Papelmeroti (a franchise owned by five siblings, the most popular is probably Robert Alejandro from the TV show "Art is Kool"), Books for Less seems like a more sophisticated equivalent of Booksale. Whereas the latter's ambiance is best described as functional, the former looks neater and their book selection is definitely cleaner (the books aren't that yellow). Books for Less also sets itself apart by specializing in hard cover books and trades, although secondhand paperbacks can also be found in the shop. Because of the focus on hard covers, the books featured in this store tend to be more expensive than Book Sale, but still cheaper than what you'd find in conventional bookstores. 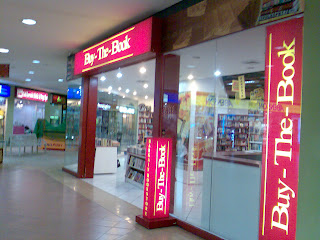 As far as I can tell, there's nothing really remarkable about Buy-the-Book aside from the fact that it's a new franchise and has four branches (Waltermart Makati, Market! Market!, SM Manila and SM San Lazaro). You'll find books that were previously stocked in conventional bookstores here (mainly because this is a weird affiliate of the National Bookstore-Powerbooks family). 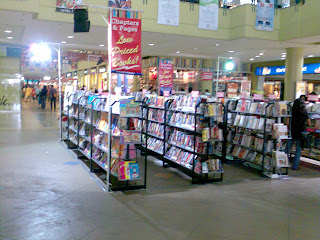 A new franchise appearing in shopping malls, Chapters and Pages isn't so much a "shop" as a "stall" (think of it as several bookshelves and one counter). Commonly found in open areas of the mall, Chapters and Pages seems to be popular as it attracts random passersby. My only concern is the security as it seems very easy to shoplift a book from the said store (I hope the salesladies are attentive). This franchise is masterminded by former PBA player Jun Limpot and can be found in places like SM Southmall, SM Sucat, SM Dasmarinas, and Market! Market! Pretty much follows the Booksale formula in addition to selling encyclopedias.
Posted by Charles at 5:20 AM

Hey, do you have a list of where the Chapters & Pages are? Particularly that picture you have in your post. Likewise, there's a Pick-A-Book branch at Robinson's Hypermart in Pioneer street. Though I missed the in Market! Market! (Where is that anyway?)

Nope to the first question (just visit a mall... any mall!).

Market! Market! is the mass-market mall for those of us who don't regularly visit Bonifacio High Street or Serendra.

Er, yeah I know where Market! Market! is. I just don't know where the Pick-A-Book branch there is.

Charles,
Where do they get their stock? I'm constantly amazed at Book Sale's ability to get quality titles for cheap. And Pick-A-Book seems to have a good number of classics.

Maybe you can interview the owners. Not that they'd reveal their supplier, but interesting to know how (and why) they put up a book store.

Mike: unfortunately, I don't really have time to conduct interviews with them.