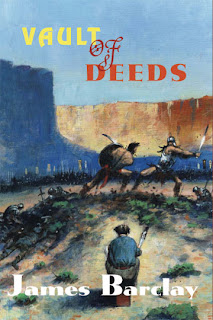 This certainly proved to be a funny read as James Barclay plays on heroic fantasy conventions not unlike Jim C. Hines or A. Lee Martinez. In Vault of Deeds, it's up to a scribe--in this case someone who records the deeds of heroes--to save the day.

Barclay's writing is easy to get into but it goes beyond simply being functional or serviceable. Dialogue and action is frequently utilized to draw the readers in while a source of comedy is the verbose and exaggerated prose spoken by the protagonists. Since this is a parody, I can't really blame Barclay for using two-dimensional heroes and villains. There's also no dallying here as Barclay gets us to the action quickly and the fight scenes are also quite commendable.

If you're going to read Vault of Deeds, it's really to tickle your funny bone. Honestly, some of the fantasy satire, I've already seen before. What sets it apart is Barclay's writing style which is more than palatable. However, there's also a couple of good lines in there and a few surprises that elevate it beyond the norm. As far as books of this sub-genre goes, it's certainly above average. Having said that, don't expect this to be layered comedy. James Barclay attempts to do one thing--makes readers laugh--and does it well. There's no additional sub-text here or complex plot threads. Which isn't to say that Barclay just threw in a random assortment of jokes as there's a structure to the prose and how the comedy fits. It's just that if you were expecting more, this isn't the place to find it.

If you want something fun and quick, grab Vault of Deeds. No qualms with the execution and it certainly accomplishes what it sets out to do.
Posted by Charles at 6:02 AM

Precisely, Charles, tis meant as a good, honest bit of fun... I loved writing it. Glad people are enjoying reading it.