Book/Magazine Review: Template: A Novel of the Archonate by Matthew Hughes 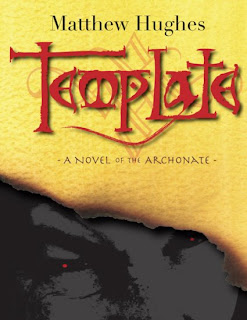 Template opens with an eager scene as the protagonist, Conn--a skilled swordsman, successfully defends himself from three opponents. You'd think this would turn into another action/adventure SF novel but Template instead drifts into mystery and philosophy as our protagonist suddenly finds himself with various choices when he previously had none.

Our main character is likable enough at the start although later on, we discover that his paradigms are alien. This becomes a recurring theme as Matthew Hughes presents planets and races with varying ethics, the perfect arena for discourse on a philosophical level that makes sense in the context of the novel.

The language is easy to get into and quite functional. The text isn't too long but what Hughes lacks in density, he makes up for with his pacing and depth.

Where Template really shines is how it draws you in through the mystery and the drama. It piques at the reader's curiosity and sense of wonder rather than through an immediacy of what happens next. For a protagonist whose main asset is his combat skills, there's little action to be found here (although those few scenes are remarkable) and the narrative is instead propelled by the characterization and plot.

Personally, reading Template reminds me of the Foundation and I, Robot series. The story is tight, it appeals to my intellectual curiosity rather than adrenaline, and a lot is conveyed through dialogue and introspection. With this novel, I can easily imagine Hughes to be the modern successor of Asimov.

Template was an enjoyable read that goes beyond the premise of an adventure or mystery. It features a refined writing style on the part of Hughes that's both easy and engaging to the reader.
Posted by Charles at 5:38 AM