Book Review: The Duke In His Castle by Vera Nazarian 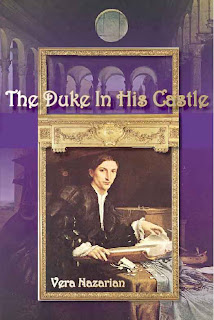 The novella The Duke In His Castle starts out like a conventional fairy tale but it soon spirals into a plotty story with unexpected twists. Admittedly, the book didn't hook me at first, especially with its rude protagonist (not quite the initial sympathetic hero but some readers will grow fond of him) and the bare-bones setting (everything takes places in a castle) but Nazarian turns things around as the enigma surrounding our main character slowly unfolds. There are two key figures in the story and both have distinctive, unique personalities that definitely set them apart from the norm. Nazarian's talent is in her language: on one hand, her dialog is direct and blunt while her narrative is verbose and detailed. I wouldn't say Nazarian's writing is mesmerizing or lyrical but it definitely goes beyond being simply functional. It harkens more to a traditional writing style infused with modern sensibilities. The author also pays attention to character development as the story progresses and this is what sustained me as a reader, the way The Duke In His Castle slowly peels off layer by layer the secrets and hidden desires of its hero and heroine. This isn't a book that I'd say initially blew me away but it's definitely a worthwhile read that relies on build-up and the big pay-off at the end, making the most out of the few elements she starts the story with.