The Good Fairies of New York just arrived in the mail last Wednesday (not that I resent getting books in the mail--the problem with being a book reviewer in the Philippines is that shipping is expensive so I'm more likely to expect a PDF sent via email rather than physical copies but the people at Soft Skull Press are swell guys and gals) and it was a terrific read (book review on Monday!). Neil Gaiman wrote the introduction and this is his last paragraph:

I owned it for more than five years before reading it, then lent my copy to someone I thought should read it, and never got it back. Do not make either of my mistakes. Read it now, make your friends buy their own copies. You'll thank me one day.

That line seems prophetic as I met up with a friend on the same day the book arrived and when I told him I had a copy, he wanted wanted wanted it. 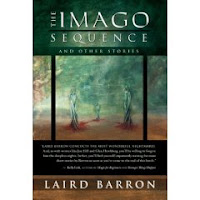 A month or two ago, I had my bookstore pilgrimage in vain hopes of finding a copy of Pump Six and Other Stories. At this point, I can conclude that only Powerbooks consistently carries Night Shade (and Prime Books) titles.

Unfortunately, a couple of Night Shade titles are placed in the comics section (because they're distributed by Diamond, the store employees thought "hey, this should go into the comic rack") so it's another shelf I have to add to my browsing list when visiting the said bookstore. While I didn't find Pump Six and Other Stories, I discovered The Imago Sequence and Other Stories. There was a moment of hesitation because I hadn't heard of the author before (well, more of lacking name recognition on my part because I had apparently read his story in Inferno) and because of the price but seeing that there were only two copies of the book (and this was the main branch) and that the publisher was Night Shade, I knew this was a now-or-never thing. Trusting the publisher's tastes, that was one of the more expensive blind purchases on my part. (I'm halfway through the book but had to stop to devote time to books that publishers send me for reviews.)

Third, a friend told me last month that he had some erotica work coming out soon. Of course we were all under the impression that it was a book under the local FHM's brand but apparently, it was a special issue of the magazine (it did not help that the contributors did not know the "title" of the book they were working on; they they just happily accepted the butt-loads of cash, which probably all evens out).

When I found the magazine on the store racks, I shyly (because I, uh, don't buy such magazines) purchased it and true to character, when I went to the cashier, a friend saw me and his first reaction was "why are you buying that?" to which I promptly replied "for the fiction!" (my publisher however admits to buying it for the pictures).
Posted by Charles at 6:19 AM