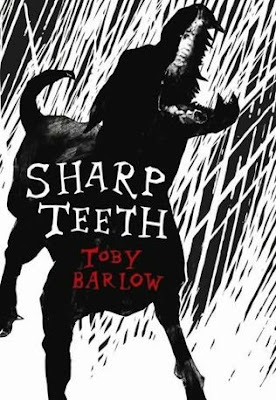 It's not everyday that you come across a book that's uniquely different as far as form is concerned. Not that Sharp Teeth, a free verse novel, is rocket science (we have Shakespeare and the Greeks for example) but it's the combination of the poetic form, the sustained length, and the genre/literary subject matter that makes this book come together.

When people talk about this book, the first thing they mention isn't that it tackles werewolves but the fact that it's poetry. That's probably the biggest elephant in the room and I'm not the most critical reviewer but for the most part, the language isn't intimidating and you don't need to hold a literary degree to appreciate the text. In fact, because of the format, Sharp Teeth is probably a lot easier to read than many of the books out there in the market. If we're just talking about word count, the book isn't particularly lengthy but in practice, the pace and rhythm is on par with a novel of the same page count.

If we were to judge the novel by poetry standards, I think it's fairly competent and has some vivid images but on the whole, it's not too striking. I think what we have to bear in mind is that while a short poem can concentrate on a dominant emotion or theme, Sharp Teeth is a much longer work thus what comes first and foremost is conveying the story.

What's surprising--and deceptive--is that Sharp Teeth actually has a massive and complex plot. There's a wide cast of characters with various motivations coming into play. Toby Barlow deals it out in pieces although we know right from the very start that all these stray elements are headed for a collision course. Occasionally, a characterization or two seems a bit off but for the most part, the author sells it to me. There are also details which add to the verisimilitude of the setting, giving it a definite sense of setting.

One's tempted to summarize this as a novelty book and it's certainly to be praised for its form but there's a backbone to Sharp Teeth as well. Admittedly, it might not have a been a book that draws my attention had it been presented in a different manner but Barlow has a couple of elements going for him and he knows how to use subtlety instead of simply being explicit in what he writes.
Posted by Charles at 3:42 AM

I really loved this book. What worked (for me) in terms of its presentation as poetry, was the distinct rhythm of the verse. I thought it was hypnotic and helped to propel that complex plot to which you referred.

Unfortunately Paul, I have no sense of rhythm or timing at all.