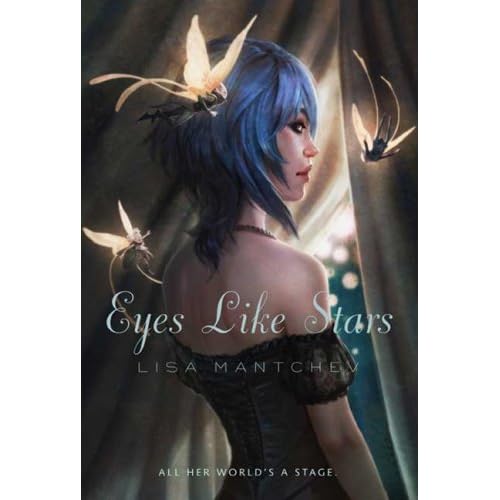 Eyes Like Stars seems to be this synthesis of fiction and plays geared towards a young adult audience. For starters, we have a heroine who lives in a magical theater, complete with clashing personalities and scenes from famous plays. The format of the text reinforces this atmosphere right from the very start, such as the Cast List at the opening (it doesn't list down each and every character but focuses on the important ones) or the reversion to the script format during a flashback (which is unfortunately dropped as the novel progresses). At this point, I'm just waiting for a song and dance number to break out.

What's really appealing with Eyes Like Stars however is the tone and the characters. When it comes to the former, Lisa Mantchev is full of energy and possesses a kinetic vibe that there's never a dull moment. In relation to the second part, she also has a mastery of dialogue as her protagonist, Beatrice, possesses a consistent and unique voice. When it comes to characterization, Mantchev succeeds as the supporting cast feels like genuine characters and the author knows how to manipulate them to showcase their most iconic traits. The Properties Manager and the Scenic Manager for example are best employed in tandem (even if they're not necessarily both present in the same scene) as Beatrice exploits the rivalry between the two. What was a particular highlight for me was the tensions between our heroine and the antagonist for this novel, Ariel, as upon reading their dialogue, one can certainly sense where the relationship of the two is headed.

Is the story predictable? There are some sections which isn't anything new but what's to be lauded with Mantchev is that she doesn't hold back and isn't afraid to throw our heroine into one disaster after another. There are points where I'm wondering "how is she going to get out of this?" and true to form, Matchev takes us into that direction. And plot aside, what's really enjoyable is the language as one simply gets swept up by the narrative. This is a quick and easy read with room for melodrama, laughter, and some wild fairies.

If there's any word of warning that I have, it's that this is the first book in a series. The novel has a definite closure but Mantchev doesn't resolve everything and it's clear that this isn't the end of Beatrice's story.

The dominant emotion that I felt when reading Eyes Like Stars is that it's fun, fun, fun and strangely reminded me of the wonder of Peter Pan.
Posted by Charles at 2:43 AM