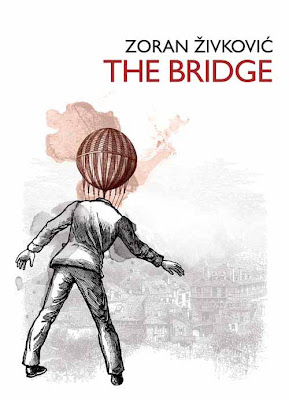 Ever since I started reading Zoran Zivkovic last year, there's an element of his writing that seemed familiar but I couldn't quite pinpoint. Thankfully, the afterword by Slobodan Vladusic mentions an author that I've read previously but forgotten: Kafka. In terms of writing style, Zivkovic and Kafka are similar in the sense that there's something impersonal about the tone in addition to the inclusion of the speculative element which the reader tends to shrug off as "normal". Vladusic has an interesting discourse showing how the two authors are different but for me, the biggest difference between Zivkovic and Kafka is that the former's writing is charming while the latter is alienating.

The Bridge at first glance feels like a formulaic Zivkovic narrative. It's divided into three parts, each one seeming like an independent story yet when read as a whole, a unifying thesis surfaces. Another recurring aspect is the bizarre hook that reels you in from the start: encountering a doppelganger, a deceased acquaintance, and an unborn child. Again, it's not particularly new and if you've read a lot of the author's previous works, this might all sound repetitive. In fact, perhaps one weakness is that the said narratives are too stretched out. Zivkovic in my opinion works best when his stories are short and brief. Sustaining the reader's interest is tricky and while the author has done so in previous works, it doesn't work quite as well here as there were a few times where I felt it's one eerie scene after another without much reward.

Despite my criticisms though, a deeper reading of The Bridge reveals that this is more than a simple concept story. It's actually rich and can be read on multiple levels. For example, the so-called bridge appears multiple times, whether literally or metaphorically. The three disparate stories are also interlinked and keen readers will spot the clues and the details which kindles one's sense of wonder in terms of world-building. And for all my complaints of Zivkovic's style, readers who are unfamiliar with the author's work may find his technique a treat.

I appreciated the fact that in this PS Publishing title, there is no introduction and instead we get an afterword. It's refreshing as I've found some introductions to spoil the story or prepare you to read the narrative in a certain way. Here, it's a matter of trust in the author's skill to condition the reader for the afterword.

Just when I thought I had Zivkovic figured out, I read The Bridge and it dispels any doubts that the author is a one-trick pony. While reading this book on the surface level is quite valid, the richness of Zivkovic is that there's usually something underlying in his text and amplifies one's engagement with the narrative.
Posted by Charles at 6:44 AM