Book/Magazine Review: Everland and Other Stories by Paul Witcover 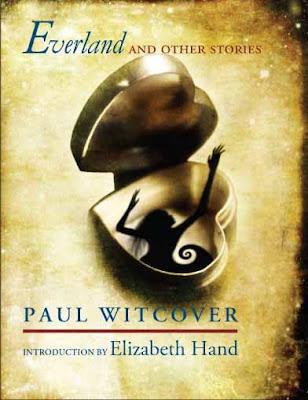 As a relatively "new" genre reader, uncovering a previously-established author is a mixed bag. On one hand, while their work might have been lauded at the time, closer scrutiny makes it falter under a more modern lens. The other possibility is that it excites you the same way one uncovers a Lucius Shepard or Peter S. Beagle and makes you wonder why you haven't been reading them before. Thankfully, Everland and Other Stories is more of the latter. In fact, if I didn't look at the end of the book for Witcover's publishing history, I would never have known that some of my favorite stories are as old as I am. The quality is certainly that of a classic, timeless and relevant and written in such a way that it captures readers of any era.

In the introduction, Elizabeth Hand swears by Witcover's story "Red Shift" and it certainly set high expectations. Amazingly, I must surrender and accept Hand's verdict. This is easily one of the most beautiful and powerful stories in the collection. "Red Shift" seems to pack everything necessary, from evoking your sense of wonder with this tragic circus, tugging at your emotions as a drunken strongman wrestles an intelligent bear, and shades of horror when the sense of inevitability comes knocking. All this time, one is anchored by the ensemble of characters and details such as the condescending but appreciative attitude of the narrator towards the gypsy. What's even more surprising is that this was originally published in 1984 and it easily beats a lot of the modern short stories that I've read.

Another rich story that reels me in is "Lighthouse Summer." While Witcover's strengths are not any less absent here, I think what's particularly striking is the way the author portrays our protagonist. He is a believable teenager yet there is a certain nobility in him that heightens the eventual conflict. If he were a tad more dastardly or naive, this would have been an entirely different story yet here he is, this complex creature whose fate is intertwined with the reader.

And then there's the relatively recent "Left of the Dial" which is rich in detail and a geek's paradise whether you happen to be a music fan or RPG gamer. Again, another common thread that Witcover returns to is character and despite the seemingly-surprisingly twists and turns of the piece, it feels just right as if no one other possibility could be considered. If there's a story that approaches the quality of "Red Shift," this is it and again, the folly of our protagonist sounds all-too human. The speculative fiction element is also to be commendable as it sneaks its way into the narrative and by the time you realize it, it's too late.

What Witcover fans can look forward to are some stories debuting in this collection. There are five and "The Silver Ghost" and "Everland" are the strongest. A common theme in both stories is the way Witcover injects a dark and horrific take on them. In the former, it's one escalating shock after another that's not altogether unwarranted and culminates into an appreciatively ambiguous ending. With the latter, the author's demented imagination casts the Peter Pan story into a new light with a refreshingly different approach and gives something back to the original.

Everland and Other Stories is a really impressive and resonating book. Thankfully PS Publshing resurrects some stories that never should have faded into obscurity in the first place and gives new readers like me the opportunity to appreciate someone as talented as Witcover.
Posted by Charles at 6:55 AM

An interview with Paul Witcover is at:
http://www.ifyourejustjoiningus.com/2009/06/01/author-paul-witcover-talks-writing-publishing-golf-and-more/

He reads a snippet of Everland and talks about writing, publishing, and a little golf!

I was looking forward to the podcast ever since you Twitter it earlier today.