Every Friday, I'll toss an idea or two with regards to tabletop RPGs.

I've occasionally GM'd for both D&D 3.5 and 4th Edition and one element I don't often use is traps. Which is ironic I think because if we're just talking about the dungeon delve--you know, entering a dungeon and plundering everything in sight for loot--traps make the most logical sense. I mean here you are, entering a structure that's been abandoned for several centuries. There's only so many undead and constructs that the GM can throw at you. Traps seem like the perfect eternal defenders and let's face it, when we watch movies and we see our heroes enter an ancient ruin, the first thing we expect are traps! Nothing seems more cinematic.

In practice however, it takes a skillful GM to make traps exciting. For me, there are two problems that come to the fore when dealing with them. The first is that often, they become the Rogue's schtick. Have the Rogue roll Search followed by Disable Device (or Perception and Thievery in 4E). That's well and good for the Rogue--he or she gets some spotlight--but what about the rest of the players? (I'm not advocating that every scene should incorporate all the players but as much as possible, involving the entire group is highly encouraged.) The other problem is that it could give rise to the paranoid player syndrome, the type that searches every nook and cranny they run into, which can lead to a time sink (both in-game and during the actual session). That's not to say it's not impossible to craft a trap-centric campaign. The Tomb of Horrors for example is one of those either you love it or you hate it modules. Personally, my issue with that module isn't that it's full of traps, but rather that the traps tend to be lethal in the "sudden death" sort of way. I mean why bother tracking down HP when the next thing you'll be running into is a Sphere of Annihilation? Still, Tomb of Horrors proves that a death-trap dungeon can work. If executed properly.

I think that's the real caveat. Anything can honestly work if executed properly. The real challenge is figuring out how to do that. 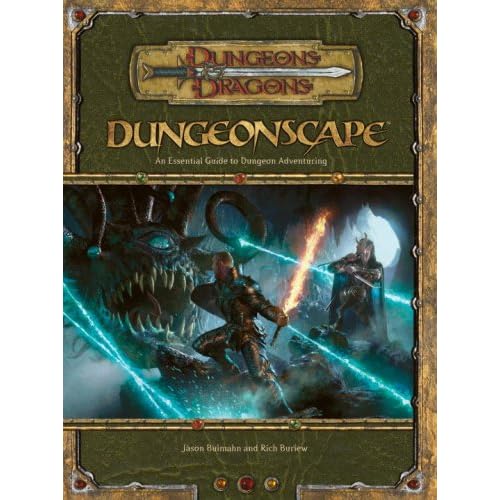 One of my favorite books from the D&D 3.5 era is Dungeonscape by Jason Bulmahn and Rich Burlew (yes, that Rich Burlew). Some of the material here got adapted for the 4E Dungeon Master's Guide but it's no replacement for the actual book in my opinion. There's an entire chapter on traps which was very informative. For example, it breaks down the various functions of traps (most GM's tend to only think traps serve only one or two functions):
The book even has advice on when and where to place such traps. For example, it recommends the Killing Intruders traps should appear early on in the dungeon as that's when it's most useful (i.e. before it triggers the rest of the traps). It honestly seems anti-climatic if that sort of traps appears at the end of the dungeon, after all the hardships that PCs have endured to get there.

However, the big highlight for me is a short sidebar giving Five Encounter Trap Tips (I omitted the elaborations):
I think the trick to making traps effective in the D&D campaign is following those five tips, with an emphasis on the first and third point. I'm not a big fan of the traps-are-only-the-Rogue's-shtick and Dungeonscape opened up possibilities (there are more concise examples in the book). One example of such an encounter is the short adventure at the back of the 4th Edition Dungeon Master's Guide. There's a couple of combats wherein traps are involved but I think one that needs to be highlighted is the Indiana Jones boulder that follows a path while you're being peppered with slings (with glue!) by Kobolds.

It's even possible to come up with cool encounters that's entirely composed of traps. Imagine a room wherein the walls are closing in (PCs can make a Strength check to delay the walls while somebody looks for the main mechanism and disable it permanently) while saws pop out of the ground, moving in a predictable if inconvenient pattern. Or maybe the PCs enter a room where there's large gargoyle heads in each corner and once they reach the center of the room, a portcullis drops and the gargoyle heads start filling the area with water. Of course those who approach the gargoyle head might be in for a surprise when they randomly spit out acid... Throw in a couple of other elements such as the exit being a sentient door that asks a riddle (or simply a physical challenge to overcome as it fights back) or spike traps that emerge in random locations.
Posted by Charles at 7:31 AM