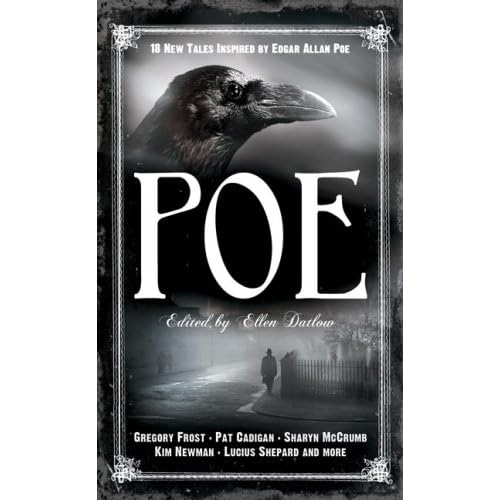 Whether you're aligned with the literary academia or an unabashed genre reader, the name Edgar Allan Poe commands much respect. I think it's only fitting that a modern anthology inspired by the author's body of work should be released on his 200th anniversary. Perhaps what's surprising is that it's Solaris Books who's up to the task of publishing such a book--and kudos to them for that--but it all comes together with the firm editorial direction of Ellen Datlow and her stable of writers. Now Datlow for me has been an editor who's less impressed with literary fireworks or verbal acrobatics but focuses more on the meat and bones of the story, its fundamentals if you will. In that respect, Poe lives up to that promise. That's not to say the stories will immediately grip you. In fact, a good chunk of them takes time to develop. But for the most part, the patience and the struggle is well worth the wait, and what's consistent among them--and what I've come to associate with Poe--is that in the first few pages of each story, there's a sense of foreboding.

The paperback's size is deceptive. This is actually a very thick tome and it surprised me that nineteen well-developed stories managed to fit. Of the nineteen, there's only one or two stories which I have some reservations about and even then, it has an impact nonetheless. An example of the latter is "Flitting Away" by Kristine Kathryn Rusch. It's actually a personal and disarming piece but I feel the author tips her hand by excessive repetition of the protagonist's "gratefulness" that prevented it from being as flawless as it could be.

Having said that, the rest of the stories are real gems and whether the consistency of the quality is due to the author's skills or the editor's whip-and-leash, the reader benefits nonetheless. I'll make a confession: I haven't read Poe. I know of him from pop culture but I haven't really actually read any of his texts. And I say that because hey, even if you feel you're an ignoramus for not being familiar with Poe, that doesn't mean you can't enjoy this anthology. I certainly did although I expect more well-read readers will appreciate the afterword at the end of each story or immediately spot the Poe associations. That said, here are my top three:

"Truth and Bone" by Pat Cadigan is very readable and while initially it seems that the story revolves around the conceit, the author holds back the endless well of ideas and instead focuses on what draws me in as a reader: the character. Cadigan pitches many concepts--each one easily a narrative of its own--but if you dig deep into the story, it's about the humanity of the protagonist and Cadigan writes not only a convincing teenager but a convincing family. And remember what I said about Poe eliciting a sense of foreboding? "Truth and Bone" captures that certain sense of tragic inevitability.

"Kirikh'quru Krokundor" by Lucius Shepard is one of the longer stories but it doesn't feel draining. It's certainly classic Shepard with his depth and characterization but there's also a certain sense of restraint on his part that makes the story tighter, cleaner, and follows a quicker pace. There's lot of excitement and tension stemming from multiple sources which is steadily doled out. Perhaps this isn't a story you read to be scared but rather more for the emotional impact it leaves you at the end.

And the story that sent jolts all over my body, one that I'd readily proclaim as one of my favorites for the year (or at least under consideration), is "Technicolor" by John Langan. I don't even know where to begin. As far as language is concerned, he immediately wins me over and this is one of the most compelling stories in the anthology. What's truly remarkable however is how Langan catches your attention in the length of the work and you find yourself living through the biographies of two different people even when you started out in what seems like a class lecture. Combine that with the Poe element and the deft execution of his ending, and you have a truly excellent story that I honestly have no idea how a lesser writer could succeed in pulling off.

There's actually a diverse set of stories here, whether you're following a moody Poe or a more modern piece (and if you just want current-day relevance, nothing is more apt than "Lowland Sea" by Suzy McKee Charnas). Heck, "Illimitable Domain" by Kim Newman is funny at the same time retaining a different kind of dread. I think what makes this anthology special is that while the contributors are inspired by Poe, they're not attempting to blindly mimic him. There are definitely Poe elements but each one is definitely identifiable as the author's own. "The Reunion" for example feels like a Nicholas Royle story albeit one with Poe influences. Definitely a great start for 2009 and Poe is one of those anthologies where most, if not all, of the stories are sophisticated and well-written. It sets a high bar, horror or speculative fiction or otherwise, for the other anthologies this year.
Posted by Charles at 5:44 AM