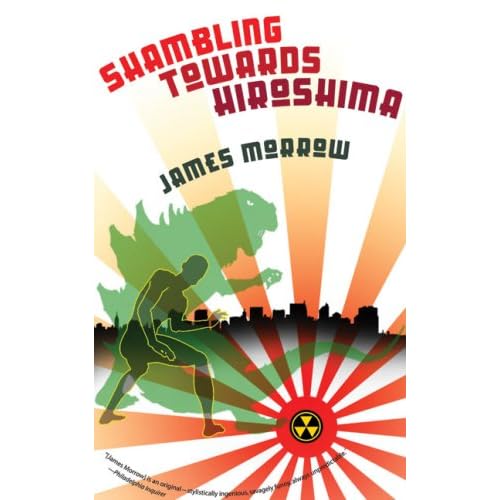 I can imagine how the premise of Shambling Towards Hiroshima could have started. The author was drunk with a friend and they started pitching ideas. Hey, you know how Godzilla was inspired by the atomic bomb? What if instead of dropping nukes on Japan, America instead unleashed giant fire-breathing lizards? As if that wasn't funky enough, let's throw in B-Movie Hollywood into the mix with the guy-in-the-monster-suit iconography. Most people will think this is either the craziest idea in the world or the most brilliant. And then they'll ditch the story the following day and work on something more "serious." Not James Morrow though. Shambling Towards Hiroshima is a short novel that's fun to read and doesn't hold back.

There are a couple of elements going for Morrow. First is the tone. While this is actually a very serious story, the narrative voice is full of sarcastic wit and personality that the author could be talking about the most drolling of circumstances (he doesn't) and one would still be glued to the pages. Morrow isn't afraid of going over the top such as the protagonist having a kinky escapade with his girlfriend (don't worry, it's PG-13) at the beach while wearing the lizard suit. And an extension of that is our main character, an actor/scriptwriter who feels like a regular Joe yet has a distinct personality that we can sympathize with.

Then there's the setting, a very passionate Hollywood and the eccentric cast that comes along with it. If it's just the details, Morrow bores deep into the film industry, whether it's the allusions to B-movies, the shenanigans that happens off-camera, or simply the type of people it attracts. Then throw in the cliche military outfit and viola!

What I particularly enjoyed is how Morrow is consistent, not only sustaining the flashy tone but keeping the reader's interest. I could probably go on and on about what lies beneath this black comedy but let's throw that out of the hat. Shambling Towards Hiroshima is an audacious romp and the author succeeds in making a ridiculous pitch into a believable narrative. Loosen up man! It's a man in a lizard suit out to end World War II, or at least die trying. How can you not like such a book?
Posted by Charles at 5:41 AM