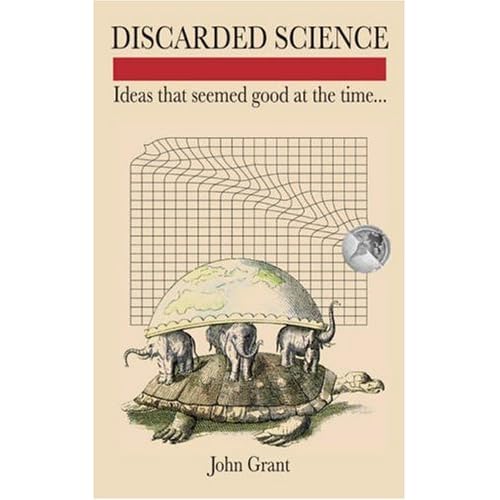 I'm not a fan of text books and while there are certainly nonfiction books out there that are informative, there's a good possibility that they'll bore me to sleep. Thankfully, Discarded Science isn't one of those books. It was author Jeffrey Ford if I'm not mistaken who said that he mines pseudosciences for story ideas and if you're that type of person (I was certainly itching to turn on my computer and start writing), this book is certainly a treasure trove. John Grant gives us a history of everything, from creation to physiognomy, and narrates it in an informal style that gets to the point and doesn't require a bachelor's degree in whatever science to understand. It goes more for a general overview of events, at the same time including the juicy details and controversies of the time. There's also a trace of sarcasm in the writing, not appearing too often but its presence is undeniable, giving the book some much needed levity.

The 300+ page journey was certainly an education and Grant is quite thorough. This reviewer discovered some of his own misconceptions and flawed belief while reading the book. What I particularly enjoy about Grant is that his writing is balanced. While the religious are typically the target of his criticisms in the book, the scientific community isn't exempted either and a good chunk of the book is devoted to their inaccuracies. Those looking to use the book for research purposes will find this to be a holy grail as far as referencing goes. Aside from the table of contents, there's a handy index at the back and even the numerous theories that the author spews has a parenthetical reference indicating which page it was originally mentioned (or where he will expound on the subject). And for the skeptics, Grant cites his sources at the end.

For is size, the book looks indestructible: a pocket-sized hardcover with the inside pages made from thick paper stock. Black and red ink is used to great effect when it comes to the text although not so much when it comes to the illustrations. One imagines that Discarded Science would have made a great hardcover or coffee table book but alas, the miniature titan is all one gets (and surprisingly the book has one of the more resilient bindings that I've seen).

Discarded Science was certainly an enjoyable read and one of the more densely packed but accessible texts. Critical analysis combined with restrained humor and compelling writing makes me look forward to the sequel.
Posted by Charles at 5:23 AM