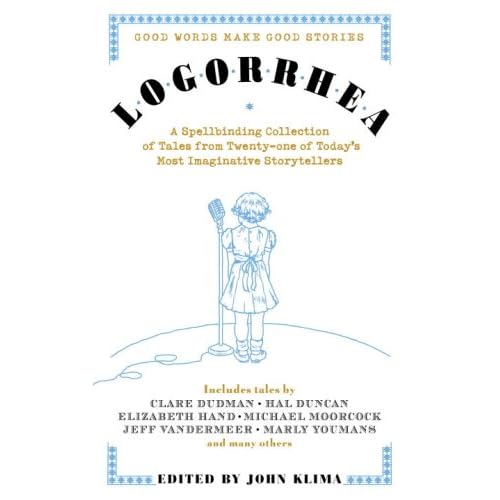 Anthologies usually revolve around a particular theme, some more peculiar than others. Logorrhea tickles my senses in the fact that it uses prizewinning spelling bee words as the basis of its stories. The question foremost in my mind however is whether it works or not. And I think for the most part it does. That's not to say that there are no unfavorable stories in the collection, which is the case when you're tackling a variety of authors, but rather there are more stories that I enjoyed than not. Perhaps what's interesting to read is how the various words are incorporated into the story. Some explicitly mention the word while others revolve around its definition. Most use elements of the fantastical. There are twenty one stories in this collection but I'll tackle the ones that stand out the most for me. "The Cambist and Lord Iron: A Fairy Tale of Economics" by Daniel Abraham is perhaps my favorite story in the collection. As can be derived from the title, the story reads like a fairy tale albeit one with adult sensibilities. The prose remains consistent all throughout and the spelling bee word, cambist, feels natural. But the strength of the story I think are our two very human and cunning protagonists, the Cambist and Lord Iron, and their relationship. As for second place, I'm tied between Alex Irvine's "Semaphor" and Jay Lake's "Crossing the Seven". The former is more of a coming-to-terms realist story that uses fantastical elements while the latter is a full-blown fantasy/science-fiction mini-epic. What I like about "Semaphor" is the characterization of the protagonist as the heart of this short story is our main character, of how he copes with loss and comes of age. Irvine even manages to incorporate the theme of a spelling bee in his fiction. "Crossing the Seven" on the other hand is this unapologetically gritty genre story that follows the typical quest format. But Lake doesn't simply recount a flashy fantastical tale but rather one with gravity. In passing, I'd like to also mention "Appoggiatura" by Jeff Vandermeer which uses all the spelling bee words in the collection but at the same time being relevant to his particular word. Having said all that, which story stands out in the most negative way? As much as I enjoy Michael Moorcock's Elric, he simply doesn't fit in this anthology. "A Portrait in Ivory" in my opinion reduces insouciant to a mere adjective and unfamiliar readers will not be sympathetic to the plight of the main character--at least in this particular anthology. Nonetheless, this anthology is a great find. It's not easy reading but neither is it the most difficult of texts. Speculative fiction fans might treasure this anthology the most but it's honestly an accessible short story collection that's a treasure trove of interesting and unique stories if nothing else.

Hehe I agree with your assessment, especially with Abraham and Moorcock's stories.