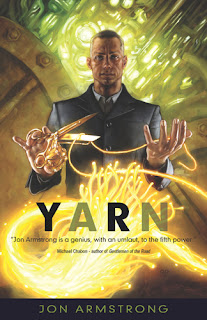 Cyberpunk never really appealed to me although its central themes continues to be relevant to this day. While I can enjoy the tropes and formulas of a sub-genre, the real challenge is how to appropriate and rejuvenate cyberpunk for a new generation of readers. While not outrightly labeled as cyberpunk, Yarn conjures the same atmosphere and rebellion. Everything from the hyper-commercialist society (with its own maleficent Lady Gaga/Madonna figure), the oppression of the rural citizen, the paranoia, and even the jarring jargon is included. Yet this is not readily apparent when you start reading the book and that's probably a good thing. Jon Armstrong takes it slow and builds up his world piece by piece.

One of the striking details in the novel is the role yarn plays in the book. Armstrong subverts the notion of sewing and uses this as part of the action. If the fusion of martial arts and guns gave birth to Gun Kata, then here, the author creates his own Yarn-fu if you will. While this might make for entertaining reading, it's disappointing though to see that for a fashion-centric novel, the protagonist's sewing skills are seldom used for actual creation. Instead, it becomes a vehicle for another way of committing violence and theft.

The author excels in characterization and he immerses us with juxtaposition between his protagonist's present and past. Initially, it's the former predicament that compels the reader but soon, the former gives way to the latter. In this, there is an uneven sense of conflict, although it is no less interesting. Much of the suspense is the flashback, although the reader is aware that the main character survives. The predicament of the present, on the other hand, has less immediacy of a threat, although the pendulum again swings in the other direction by the time we reach the climax. Armstrong does a risky attempt at narration near the final part of the book where he alternates between present and past with no breaks but for me, it worked.

Yarn also has this sense of contrivance as a narrative but this is fiction we are reading and Armstrong is unapologetic about connecting and resolving what he's established in the beginning of the book. Ideas, themes, and emotional roller coasters are constantly reinforced, making for a more conservative narrative. Still, despite its shortcomings, Yarn has a unique identity and fresh voice, and Armstrong executes his concept with flair and energy.
Posted by Charles at 6:35 AM