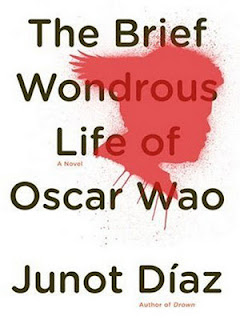 What immediate fascinates me about The Brief Wondrous Life of Oscar Wao — and this isn't readily apparent once you're done reading the novel — is that it's a different kind of book depending on who you are. A more formally-trained reader for example might home in on the history and politics of the book, an immigrant might relate to the expatriate experience of the characters, a geek might applaud all the comic and D&D and anime allusions, and wallflowers will outright identify themselves with Oscar Wao. It's the secret plurality of the book (because I think the ability of a novel to address multiple concerns isn't exclusive to Junot Diaz's writing) that makes The Brief Wondrous Life of Oscar Wao accessible to all kinds of readers, whether you're a Pulitzer judge or a fanboy in line at a convention. Which is quite a paradox because on paper, this seems like the most exclusive book to hit the shelves: it uses Spanish frequently, invokes a vast knowledge of pop culture ranging from Marvelman to Macross, and features footnotes the size of vignettes. And this is a testament of Diaz's skill as a writer that he makes it work.

In terms of craft, there's a cadence to Diaz's writing style that sucks you in: the beat and the flow makes the pop culture analogies effective instead of sticking out like a sore thumb. And speaking of allusions, as a genre fan, the way he utilizes geekspeak as metaphors is simply impressive: Kimota! 4d10. Ringwraiths. It's very much possible that the reader won't get all — or any — of the references (and with the popularity of the Lord of the Rings movies, the rise of MMORPGs, and comics going digital, the likelihood of catching the nuances keeps on improving) but the story works regardless of that. And that pretty much sums up the language barrier as well as the mood and context clues are enough to guide the ignorant reader. But if you are the perfect, ideal reader (Carlos Hernandez's Oscar Wao: Murdering Machismo comes to mind), then the book becomes this rich, vibrant novel that's daring and (I wouldn't call it ahead of its time in terms of reader reciprocity) timely. And then there are the usual stuff: tone, character, telling details, and a larger-than-life antagonist that never makes a personal appearance (well, he does in a brief scene) but dominates most of the book.

It's the personal impact, however, that strikes home. The Philippines for example was also a colony of Spain (and faces American colonialism) and I can relate to the language and the themes. We have our own Trujillo in the form of Marcos and the feudal (as well as misogynistic) atmosphere and mindset is (unfortunately) all too common in the present. Oscar Wao belongs to my generation, from the comics he reads, the games he plays, and even his luck with women (perhaps the only disconnect is that he is overweight and I am underweight). I'm not quite the ideal reader but it's close.

To claim that The Brief Wondrous Life of Oscar Wao is fun is an understatement. But much like Lolita and stories by Gene Wolfe, there's a lot more one can get from digging beyond the surface. There's something for everyone and it's a compellingly-written narrative.
Posted by Charles at 6:41 AM