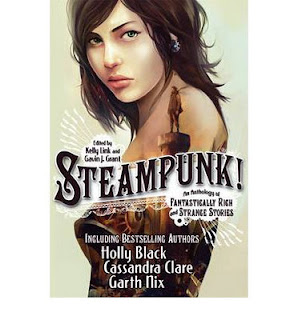 As a reader, I am ambivalent when it comes to the theme of steampunk, but the Young Adult (YA) — more on the "adult" side rather than "children's" — aspect of this anthology is something I can comprehend and appreciate. If you want to get down to the nitty gritty of this book, Steampunk! follows the paradigm of anthologies in the sense that some stories fail to impress but there are also selections that make the purchase worth the price of admission. (As an aside, as an owner of the European version of the book — pictured above — the US packaging is more striking.)

Despite the notions at what makes a story steampunk, there's actually a variety of setting and styles in this anthology that doesn't limit itself to the Victorian period. "The Last Ride of the Glory Girls" for example is a fun fantasy Western while "Peace in Our Time" by Garth Nix and "The Oracle Engine" by M.T. Anderson has this Roman-era atmosphere. "The Summer People" by Kelly Link and "Steam Girl" by Dylan Horrocks also shows how to do steampunk in the modern setting, and each one does so in a unique way.

When it comes to the stories that disappointed me, it's interesting to note that they failed not because the writing was incompetent, but because the story didn't go far enough. The opening story, "Some Fortunate Future Day" by Cassandra Clare, is a good example of this: the protagonist of the story owns a time-traveling device and the author attempts to avoid a Groundhog Day-style narrative when that's the initial expectation. Clare attempts to craft this ambiguous ending in which the reader fills in the gap but instead, the end felt like a cop-out. Similarly, the comic "Seven Days Beset by Demons" by Shawn Cheng is impressive thematically (one day represents one of the Seven Sins), even if at times I feel Cheng is stretching the definition of a particular vice, but it takes the easy way out when it comes to the resolution of the story: the protagonist encounters conflict but never really overcomes — or failing that, compromises — the challenge. That's not to say that I feel every story must end with a positive ending but here, it feels like plot was sacrificed at the expense of theme, and I'm one of those readers who want more of the former than the latter. That's also not to say that what either story attempts can't be achieved. The other comic in the anthology, "Finishing School" by Kathleen Jennings, promises a continuation of the narrative but it ends at the right point where the reader is satisfied with the existing story and leaves enough hints to compel them to read more (if ever such an opportunity arises).

Having said that, I don't judge an anthology by its weakest stories but by its strongest. And Steampunk! packs a whallop. The highlight of the book is easily Kelly Link's story for the year, "The Summer People," especially for those who didn't catch it in the current issue of Tin House. In many ways, this is an evolution of Link's writing, stylistically a stark contrast to her earlier work. What's impressive with "The Summer People" is the conflicting emotions it instills in the reader by the time they reach the ending, and this I attribute to Link crafting a holistic and sympathetic protagonist. There is also the author's reinforcement of her bargain theme that doesn't come off as didactic.

The other stories in the book are simply fun. "The Ghost of Cwmlech Manor" by Delia Sherman for example combines the Gothic atmosphere with humor and, of course, steampunk, while "Everything Amiable and Obliging" by Holly Black uses a tried-and-tested trope often used in boys anime/manga and subverts it. But what really stands out for me is "Hand in Glove" by Ysabeau S. Wilce which showcases the author's range and creates this deceptively simple mystery that packs a lot of elements like humor, the scientific method, mad scientists, and compelling characters with distinct voices. I'm seldom impressed by Cory Doctorow's fiction, but "Clockwork Fagin" was enjoyable as it was faithful to the tone and trope the author was attempting to evoke. It feels like there's a larger, longer narrative surrounding this piece, but the brief snapshot Doctorow focuses on is enough to slate the reader... for now.

Overall, this was as fun, accessible anthology, and despite the initial misses (the two stories that I didn't like appears early on in the book), Steampunk! contains a lot of terrific, memorable stories. At times, I question the steampunk theme, since some of the stories would work even if that particular element was missing, but then again, I'm not exactly the type to prioritize sub-genres over good storytelling in general.
Posted by Charles at 5:14 AM