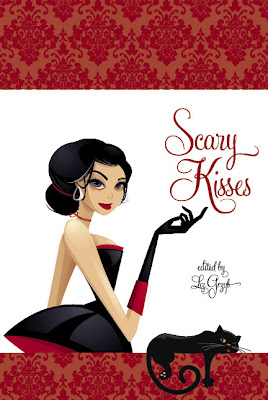 It wasn't until I finished the anthology and reread the dedication that I finally grasped the theme of Scary Kisses. Horror obviously plays a role in the fiction but what else? Maybe it's because I'm not astute when it comes to the romance genre, but the other vibe I got from the book was a certain level of playfulness and ridiculousness. Take for example the last story in the book, "Pride and Tentacles" by D.C. White, which will polarize Lovecraft fans. The premise is that the Elder Gods are all part of a (romance) book club and that's either blasphemy or comedy, depending on your point of view (I'm not too particularly attached to Lovecraft so it's the latter). Not so much horror there, although Elder Gods are usually elements used in horror fiction. On the other end of the spectrum, we have "Bread and Circuses" by Felicity Dowker which is dystopic and emotionally-charged. A lot of outdated and current taboos are tackled here and for the most part, the atmosphere is dark and very serious. It's the complete opposite of "Pride and Tentacles".
Scary Kisses is a slim anthology but the length suits the content of the book. A lot of the stories are relatively short (a point that I'll tackle later) so if this book were double the page count, the sum of the stories would have made less of an impression in my opinion. As it is, it fits the emotion the anthology is trying to elicit from the reader, which is that this is a fun book that's not to be taken too seriously (although some stories are exceptions).
I previously mentioned that some of the stories are short and they're comparable to flash fiction in terms of impact. Now I'm not the biggest fan of flash fiction because a lot of them tends to be a bit one-sided in terms of features. And for a lot of the short short stories here, that's the case. "Black Widow" by Shona Husk, for example, is great in terms of description and setting the mood. But when it comes to everything else, such as plot, it falls short and ends up simply being a premise story. Not that there's anything wrong with that, especially considering the length of Husk's story, but I tend to want more "meat" in my fiction. That's also the problem with "Phaedra" by Bruce Golden. Golden has a great introduction and style but the ending--and the conflict itself--felt unsatisfactory.
There are a number of stories as well that have lengthier narratives and subsequently yield more complex results. For example, "The February Dragon" by Angela Slatter and L. L. Hannett is a holistically well-developed piece, whether it's the characterization, setting, language, and overall story arc. I like how all these elements are balanced, and how the ending is foreshadowed. Another standout piece is "Cursebreaker: The Welsh Widow and the Wandering Wooer" by Kyla Ward. In certain sense, it's formulaic as it follows the tropes of a mystery but Ward manages to entertain and surprise the reader. The twists and turns are carefully conceived, and the author has a compelling tone to back it all up. It also shouldn't be a surprise that these two stories are also the lengthiest pieces in the anthology.
Overall, Scary Kisses is about expectations. If you're looking for light and entertaining reading, then you can't go wrong with this horror-romance mash-up. It certainly fits my profile of a book you read while on the go. If you're looking for dense and powerful fiction, Scary Kisses has those too, just not a lot of it.
Posted by Charles at 8:44 AM

Many thanks for this review. Greatly appreciated.