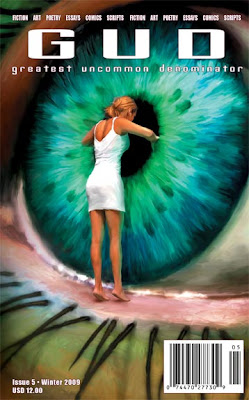 I'm honestly surprised that it's been more than a year since I last reviewed an issue of GUD Magazine--and that we're only at issue #5. For me, the biggest difference between issue #4 and issue #5 is how the latter has come into its own in terms of mediums. Issue #4 featured quite a selection, with nonfiction, fiction, poetry, and art, but issue #5 seems like the posterboy for interstitial fiction: we have comics, photo essays, and even a play! All this diversity would be for naught, however, if it didn't sustain a level of quality. Thankfully GUD Issue #5 actually holds up quite well.
Because of the varied material that GUD publishes, the table of contents of this issue looks thick, even if the publication is only 200 pages long. There's the photos and the artwork for example, which take up a single page, but as the cliche goes, "a picture is worth a thousand words". "Infrared" by Richard Kadrey for example is this bizarre image that looks like it came out of a (well-made) genre film and remains memorable, if nothing else. Others, like "Bust" by Jon Radlett, works not due to the image per se, but in tandem with its title, which acts as a caption. "Bust", I think, shows how an otherwise unremarkable title and photo could be combined to produce something greater than the sum of its parts. Compare this to "Infrared" which I feel stands out more due to the image rather than the combination of the two.
Another set of short pieces are the poetry. For this issue, the editor's preferences are transparent. The selected poetry are accessible and in a sense leans more towards playfulness. There's some word play involved but it's not really lengthy or too technical. For example, "The Grammar of Desire" by Paul J. Kocak is direct and indulges us readers who are familiar with basic English while "7 Ways to Fake an Orgasm" by Melissa Carroll delivers what it promises.
There's just one nonfiction piece in this issue, "The Prophet of Menlo Park" by Paul Spinrad, but it's a powerful brief biography of Douglas Engelbart, a man responsible for many of today's luxuries--effectively transforming what seemed like science fiction at the time into a reality. As a technology geek, this is definitely one of the must-read pieces in the magazine. Similarly, there's just one play in this publication, "Sweet Melodrama" by Tristan D'Agosta, but it really stands out, sometimes more than the fiction. D'Agosta has a great sense of pacing making this a quick read while sustaining the reader's interest. I find that comedy is difficult to execute but D'Agosta makes it seem effortless and organic.
There are two comics in this 'zine. I didn't really care much for "Gunga Din" by Joseph Calabrese & Harsho Mohan Chattoraj, although the art is dark and gritty. What impressed me, however, was "Ada Lovelace: The Origin!" by Sydney Padua which succeeds because of the way Padua combines fictional elements into her narrative, making what would have otherwise been a straight-forward story into an entertaining and relatable read. The art is in tandem with the humorous direction Padua takes this biography, and includes some of the most refreshing lines I've read in a comic.
And then there's the elephant in the room, the fiction of GUD Magazine. They each succeed in leaving an impression, even if they're not necessarily perfect stories. Take for example "Nature's Children" by T.F. Davenport. Initially it was quite confusing but it eventually paves the way for the ending, which is very science fictional and gives the reader food for thought. Not necessarily the most elegantly-written piece, but the author's thesis and intent hopefully makes up for that lacking. "Lost Lying on Your Back" by Steven J. Dines, on the other hand, is plain disturbing and powerfully so. My only complaint is the final scene, not because it was unnecessary but I felt it could have retained its ambiguity, especially considering the subtlety Dines employs earlier in the narrative. The reader gets a sense that something is wrong with the protagonist, but can't quite pinpoint what it is.
Two stories that I feel are powerful character-centric pieces are "The Tiger Man" by Geordie Williams Flantz and "Liza's Home" by Kenneth Schneyer. These, I think, could have easily placed itself in a literary journal the way they tackle their protagonist's plights. "The Tiger Man" for example is very surreal and it's readily apparent that something is bizarre when it comes to the main character's relationship with his wife. The speculative element here, in my opinion, acts as a filter to tackle this dilemma. "Liza's Home", on the other hand, features time-travel paradoxes while still remaining very human and emotional. It could easily have been a derivative O. Henry story but what made O. Henry's writing popular is the way readers sympathized with the characters, and Schneyer succeeds in that.

Hands down though, my favorite piece is the opening story, "Imperfect Verse" by Rose Lemberg. From a technical standpoint, Lemberg's style captures the era she's trying to emulate, whether it's the purple prose or her poetry. The Norse flavor of Lemberg's fiction is consistent and the final scene elicits all sorts of emotions from the reader, from horror to satisfaction. On the other hand, there is also the subversive element of Lemberg's story. We have a strong female heroine who is rebelling against the norms of her time, and the means in which she succeeds is similarly taboo, at least in the context of her culture.
Posted by Charles at 6:56 AM

Thanks for a pleasant tip of the hat regarding my poem.