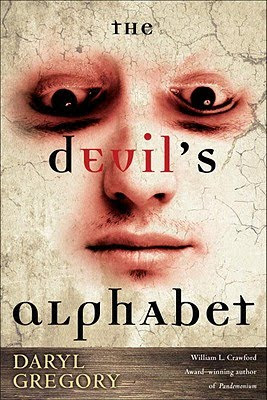 I'm conflicted when it comes to Daryl Gregory's latest novel, The Devil's Alphabet. I had high hopes for the book, especially after reading the first few chapters. Here was a novel using the tropes of realist fiction--the character-centric plot, the homecoming to the small town that one grew up in, facing the prejudices of society--and enhancing it using science fiction/fantasy elements. The main protagonist is literally a stranger to his own home, especially when the people he knows have been genetically altered. This is also the perfect excuse for the author to introduce the reader the world as while these elements are familiar to the protagonist, he nonetheless remains an outsider.
For most of the book, Gregory sustains this trend of exploring a town's social dynamics while still propelling the personal conflict of his main character and the science fiction elements. The problem, in my opinion, appears towards the end. Whereas Gregory successfully juggled the tropes of two genres early on, the book doesn't quite figure out how it should end. As a science fiction reader, the ending of The Devil's Alphabet fails because it discards a lot of the hinted elements in the story. Also, don't expect closure when it comes to the explanation of the bizarre events that happen in the book. Which would have been fine if Gregory's other intent was successfully executed.

As a character-centric novel, it follows the trend of not drastically altering the status quo, save for our protagonist's personal life. Which, again, would have been fine if Gregory had shown us this growth but the changes by the end seemed abrupt. For example, one of the supposed rivals of our hero is suddenly a welcome friend in the epilogue, whereas in the previous chapters they were at each other's throats. There are also incidents which are ripe for the picking and while touched upon in the book, could have been a venue for more dramatic tension and depth. The issue of birth control for example is a complex matter in the presented context and while it had its moment of exploration, wasn't fully mined. Worse, it becomes a didactic and cliche scene in the epilogue.
It's not that Gregory isn't a talented writer, and if anything, The Devil's Alphabet shows that this author can really write. Unfortunately, this is also an example of how a novel can be great 2/3 of the way, and the ending simply being a clutter of conflicted agendas.
Posted by Charles at 8:00 AM