One month ago, I received my copy of Shine, an anthology edited by my friend Jetse de Vries. It arrived via courier but along with it came an unexpected expense: a bill from Customs charging me for the book's importation. Now book taxes isn't quite a new phenomenon in the Philippines. Last year, we had the event dubbed the "Book Blockade" as Customs (in reality the puppets of the Department of Finance) prevented the importation of books by bookstores unless the latter paid exorbitant fees for them (this was taking place at the height of the Twilight phenomenon). Now this was a relatively new practice considering the Philippines is part of the Florence Agreement, which waives the taxes when it comes to book imports I'm fine with paying taxes for my books but in this case, the government should be transparent: either it's complying with the Florence Agreement or it's not.

The story of the Philippine Book Blockade fits the theme of Shine: optimistic science fiction. This particular news-worthy item wasn't covered by the major networks. Instead, a grass-roots campaign began through social media, whether it was blogs, Twitter, Facebook, etc. Eventually, it was covered in individual columns in newspapers. A few weeks (which, in itself, is a red tape miracle) down the line, the Department of Finance was thwarted by the president herself who proclaimed that books wouldn't be taxed.

That's not the end of the story though. Like the stereotypical villain found in fiction, the Department of Finance proclaimed that this wouldn't be over. And they kept that promise.

You see bookstores aren't being taxed by customs for the importation of books. Individual citizens, however, are. When you order a book abroad and it arrives in the post office, you're charged an exorbitant amount. And in typical Filipino red-tape fashion, there are hidden costs in the price breakdown such as "import processing fee" and "customs documentary" stamps". In my case, Shine had a retail price of UK$7.99. I paid P548.60 in taxes for the particular book, which amounts to $UK7.99. And this was, mind you, a review copy sent to me, as opposed to a book I might have bought from Amazon.

Attached below are the official documents, as proof: 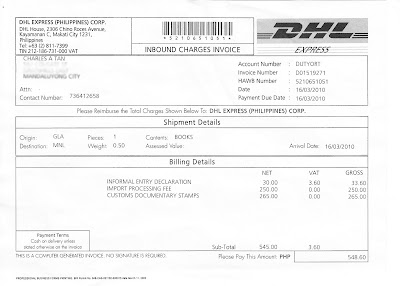 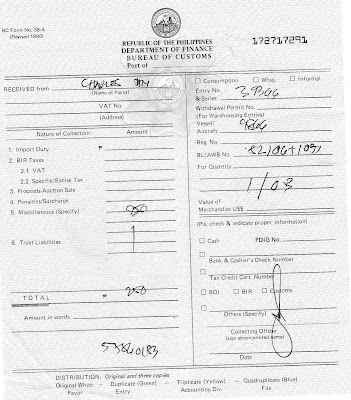 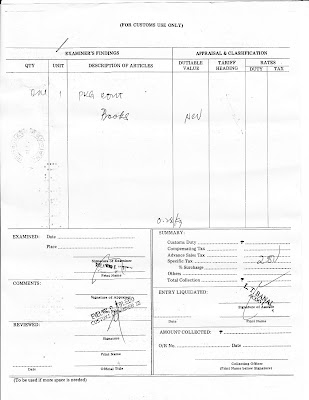 Oh man, I can feel your rage from here, Charles. And justifiably so as well. As all Asians find out, what the government SAYS, and what the petty officials actually DO, are two completely different things. Commiserations.

Very sorry to hear that, Charles, and I feel your pain.

By coincidence (or not) Ralan Conley told me that the Danish tax people use the same shenanigans (charging import taxes for books), although according to Ralan you then tell them it's illegal and that's that.

On a related note, when I sent a copy of SHINE to a good friend in the USA, the Dutch post office charged me 10.45 euros, which is more than the book is priced. Basically, if I want to send a copy to people outside the European Union it's cheaper for me to use Amazon (or the Book Depository) than actually sending one of my own copies.

It's insane, and I suspect this will help push people towards E-books.

The irony of eBooks is that it's not typically available in countries where print books are expensive, such as Australia. (So no help there either, unless it's for review purposes.)

Hmm... from an analysis of your receipts you did not pay any import taxes on the book you bought.

What you DID pay for is the Import Processing Fee and the Documentary Stamp Taxes. Which is constant per shipment no matter what you import.

Obviously what we have here is the DoF being literal about what GMA said. True, no taxes are being collected on your books, but book keeping fees are.

Someone needs to take this to court. Or persuade the next president to issue an Executive Order to stop collecting processing fees for 0 tarrif books.

this is an example of unauthorized things that is shouldn't be paid for. that fee is not applicable.