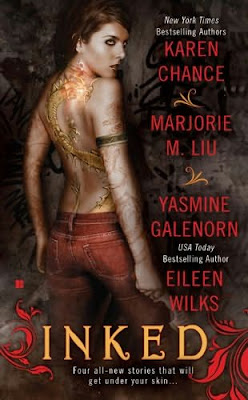 Not that familiar with the current trends of the paranormal romance/urban fantasy genre, I decided to pick up Inked which features four stories (in the novella-novelette range) from writers of that genre. Karen Chance, Marjorie M. Liu, Yasmine Galenorn, and Eileen Wilks contribute to this anthology and it does give you a taste of their respective series. The conceit of the book is that the stories must include tattoos, and Inked for the most part fulfills that goal as three out of the four stories doesn't shoehorn that requirement. Another thing going for Inked is that while the contributors write under the same genre, each one's stories feel different from showcases a different facet of paranormal romance and urban fantasy.

In "Skin Deep" by Karen Chance, Chance's writing style is reminiscent of Laurell K. Hamilton in the sense that the consequences of her divergent reality is well thought out and explained. Her setting isn't simply the real world with supernatural monsters in it, but rather a seemingly-realistic take on what would happen if creatures like werewolves existed. For the most part, it follows the tropes established by Hamilton, such as the inclusion of a flawed and troubled protagonist. As for the story itself, it stands well on its own, although one can't help but feel there's a larger sub-plot in the background that this story is hinting at. It's not the tightest story, but it does succeed in piquing your curiosity.
"Armor of Roses" by Marjorie M. Liu feels the most unique. The reason for this is that this story leans more towards urban fantasy than paranormal romance, with the latter being only present in what serves as the prologue (although the little that there is is titillating enough). Admittedly, the atmosphere of "Armor of Roses" has less of an urgency compared to the other three, and while those looking for an adrenaline surge might find that detracting, for me it's not a deal breaker as the slower pace fits this particular story. The strength of this piece is how Liu conveys her version of China in addition to reconciling time travel tropes with the urban fantasy flavor. Overall, Liu's style feels refreshing and different, although this isn't necessarily the most compelling of the four stories.
"Etched in Silver" by Yasmine Galenorn honestly feels mediocre, and while the inclusion of tattoos flows is integral in the other stories, here it's not a vital element--which isn't necessarily a bad thing, mind you, but worth mentioning nonetheless.

"Etched in Silver" is competent enough although it feels a bit generic with the melding of fey culture and the modern world. If Liu's writing leans more towards the urban fantasy side, Galenorn's story is slanted more towards the paranormal romance aspect, and it immediately gives off that vibe in the first few pages. If you want to be seduced by romance, this is probably the story that would appeal the most to such readers, but for me, this was fun albeit unmemorable.
The most polished piece in my opinion is "Human Nature" by Eileen Wilks. I find that to be the case because while the author hints at her larger series, there's little exposition spent at covering topics that's not relevant to the current plot. The dilemma of her protagonist is the sole focus of the story, and isn't hampered by continuity and sub-plots. Technique-wise, this is a formulaic investigation story with motivations and clues laid out. As far as the mystery aspect is concerned, I found it to be satisfying enough. Wilks also hits all the right beats, whether it's the genuineness of her characters, the timely inclusion of humor and romance, and the complexity of the situation.

Overall, Inked is a good way to get introduced to the worlds of its contributors. Personally, I found the book to be popcorn fun, but otherwise unremarkable.
Posted by Charles at 8:07 AM