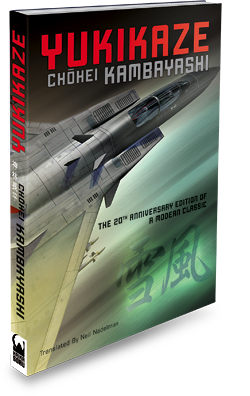 There are times when spoilers are needed to tackle a book and Yukikaze is one such case, so readers have been warned. Yukikaze feels like a very unique science fiction novel. The first thing that comes to mind is the format: eight stories that could stand on its own, but each succeeding chapter builds upon what's established before. There is also the central theme of the book, the clash between what it is to be human and what it is to be a machine, although Kambayashi presents this in both overt and subtle ways. Third, while this is definitely classified as science fiction, the author uses fantasy names which threw me a bit off at the start, but works well in the long run.

In terms of technique, Kambayashi frontloads all the necessary details in his foreword and while this isn't anything new (The Stars My Destination by Alfred Bester comes to mind), what's different here is how the author subverts your initial impression as the story progresses. The most prominent aspect is the fact that the pilots of the Super Sylphs are supposed to be cold and inhuman yet by the end of the book, our hero's humanity is established. Related to this is the bonus material at the end, namely Ran Ishidou's essay "Human/Inhuman". It's a well-written essay, but it also explains what the reader is supposed to have figured out for themselves.
When it comes to the format, Yukikaze seems quick thanks to the division of its chapters. Each one is a self-contained scenario that focuses on one theme, at the same time contributing to the overall arc. In this sense, Kambayashi's writing can be transparent sometimes. In "All Systems Normal" for example, it's clear from the beginning that the character introduced in this story is going to die, especially when he's paired off with a love interest. Still, overall, these standalone segments give us enough snapshots of the larger picture so that the reader is forearmed with knowledge that the characters aren't immediately aware of.
I wouldn't describe Yukikaze as perfect by any means, but the way it tackles its thesis is definitely worth a read and is unlike anything that I've encountered before. That this was originally published in 1984 is surprising in itself, and shows how Japanese science fiction can be very different--and sometimes way ahead--of Western science fiction.
Posted by Charles at 9:13 AM

Is this the same Yukikaze the animated series? Wow. It was written that long ago? I liked what I have seen of the anime and am curious of the book as well. Is it locally available?

Got it from Fully Booked.