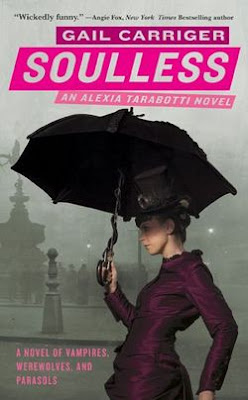 Who says marketing doesn't work? When I passed by the bookstore and saw Gail Carriger's name, the first thing that popped into my head was the YouTube video of creating the book cover for Blameless, the third book in the series. There's also consistency in the book design, copy text (parasols!), and even the author's bio (she's an incurable curmudgeon!) as they immediately (and effectively) convey that this is a very funny novel. At the very least, Soulless immediately wins in the presentation department, even if you never ever crack open the book.

But disregarding the book's presentation, how does Carriger's prose fare? Well, to be honest, I stayed up late just so that I could finish it. In the case of genres, I'm usually confused by Urban Fantasy and Paranormal Romance but in the case of Soulless, I'd gladly conclude that this book falls under both, and throw in Steampunk for good measure. There is also the issue of comedy, and while both Urban Fantasy and Paranormal Romance have their fair share of funny moments (I think they call it romantic tension), they aren't usually, as a whole, comedic. The key to Carriger's comedy is her tone and style. It's not about bluntly whacking you with what's supposed to be funny, which is the technique that many genre-comedy writers employ, but about restraint and even subtlety. On a certain level, you also can't take Soulless's concept too seriously, which compounds the effect it has upon the reader.

Another element in favor of Carriger is her setting. Rather than the modern-day procedural mash-ups that is common among many Urban Fantasy and Paranormal Romance books, Soulless takes place in a Victorian setting and follows Victorian mores. This is a product of our times though as Carriger's protagonist is what we'd classify as a liberal and modern woman, although her paradigm nonetheless is faithful to her period (and more importantly, her family's). Carriger also introduces a very memorable cast, including a flamboyant and gay vampire that concurrently follows the stereotype and grows beyond it.

Having said that, Soulless follows the formula that makes Urban Fantasies and Paranormal Romances successful, including the police-procedural part and subsequent love interest, although the re-skinning and subversion of these doesn't make it immediately obvious. As far as consistency goes, I'm not quite sure how to feel about Carriger's technique of drifting into the POV of other characters, when most of the time it's centered around her protagonist. It works, don't get me wrong, and diving into the mindscape of others is there to set the scene and prepare readers, but is it absolutely necessary as it breaks the established pattern?

Overall, I found this to be a fun book that's retro and post-modern at the same time. Soulless I think is an example of how everything comes together for the book, be it the author or the publisher.
Posted by Charles at 8:44 AM

Thanks for the review. Now I'm looking forward to reading this book! The single excerpt I'd read was not promising.

yeah, the publicity here was low-key but really sticks to the wandering attention. been meaning to pick this one up as well.