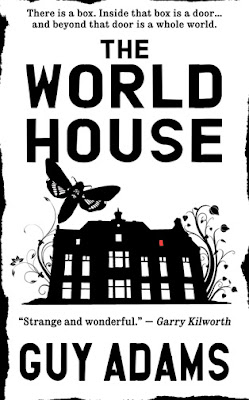 Let me get this out of the way: The World House isn't a perfect novel. It's a book that excels in some areas and simply falls flat in others. It's not that the latter is horrible, but the mere competency of the writing simply kills the potential that Guy Adams establishes early on. To the author's credit, his good points appear early on.

Take for example the issue of characterization. In the first chapter, the prose immediately sucks you in as Adams presents a flawed but compelling character in the form of Miles Caulfield. He has a distinct voice and for the first few chapters, the reader is buying into his predicament. Problems however start to crop up as the novel progresses, and part of this is the book's ambition. The World House is presented as vast and encompassing, and it's justified that the author injects multiple points of view. This is a tricky technique however and unfortunately, Adams fails to pull it off--at least for the rest of the cast. Some characters end up more developed than others and this reader wishes that each one of them could have been built up as elegantly as Miles Caulfield. That's not to say they don't end up with distinct voices--they do--but the reader isn't as invested in them. Sometimes, this can be attributed to Adams shifting perspectives too often too quickly. At other times, it's because their presentation is merely mediocre. This issue partially resolves itself towards the latter half of the book as the characters form into parties, limiting the perspective shift, but by then, the characters feel like they're being moved by the plot.

There's also the issue of interludes and I'm somewhere in the middle. On one hand, it's a stark contrast from the rest of the chapters, especially early on. If the fantastical element in the chapters are subtle, the interlude hammers to the reader that hey, this is speculative fiction. I also can't reprimand it out of hand as it does foreshadow events in the story, but iit can at times feel like a blunt tool.

What I can't fault Adams however is his ambition. Conceptually, the book draws in various science fiction elements and brews them into one pot. While some of these points could have been presented more elegantly, they do manage to get their message across. Is it worth putting up with less than stellar prose? I honestly found it okay. I'm not dying to read the sequel, but if it's handed to me, I'll probably put up with it in the hopes that Adams's consistency improves.
Posted by Charles at 7:09 AM