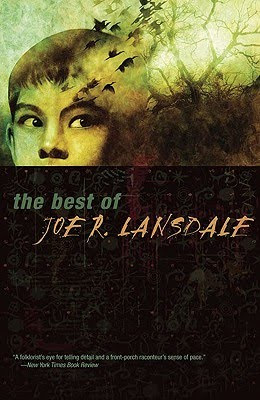 Reading The Best of Joe R. Lansdale is peculiar for me because for the most part, this is my only exposure to Joe R. Lansdale. I've heard of his reputation before, whether it's his Drive-In series or how his stories have a Texas-flavor to them, but if we're talking about a genuine acquaintance with his writing, for me it's the new frontier.

The first thing noticeable with this collection is that the order of the stories aren't arbitrary. The first quarter of the book, for example, are stories that tackle old age and senility--geriatric fiction if you will. It's a theme you don't encounter in speculative fiction often but is quite relevant. On one hand, you have the cheesy "Bubba Ho-Tep" (yes, I've seen the movie), and while at times the story itself feels manipulative (our protagonist for example is spoon-fed all of the relevant information), it nonetheless hits the gut when Lansdale talks about the aging of man (and an icon). Lansdale's technique is also quite diverse, as can be seen in "Fire Dog" which is more fable-like but is one of his most effective pieces. And sometimes, it comes down to the framing device the author uses. "Mad Dog Summer" could easily have been a coming of age story--and it is--but the way Lansdale precedes and concludes the narrative with the perspective of the narrator as an old man makes all the difference. Suffice to say, the experience was refreshing and welcome.

And then we get the rest of the collection. Again, I can't stress Lansdale's diversity. Some of the stories aren't speculative in nature but feel more Western. Others are simply unlabeled stories, although they do have an agenda. The closest approximation I have when it comes to Lansdale's writing is that they're modernized pulp, possessing chauvinistic male bravado and racism of a certain period. That's not to say Lansdale is racist, simply that he was writing about a culture that, unfortunately, was. "Mad Dog Summer", "The Big Blow", and "Night They Missed the Horror Show" for example features compelling African-American characters but they also contain foils which hate them simply because of the color of their skin. The first two are immersive and dramatic, while the last one is a flat-out horror tale in the same way dystopias are chilling.

Lansdale's morals are also evident in his flash fiction, such as "Duck Hunt" and "Cowboy". They're too agenda-driven for me however, in the sense that they come out as didactic and lacking the finesse of his other stories. "Cowboy" for example is simply an African-American airing his complaints as to why there are no Black cowboys. Which is true enough and that's perhaps the true horror here, that that's the reality we live in, but as a story, there's not enough conflict to draw me in.

For the most part however, I did enjoy Lansdale's fiction. Consistently, the setting and voice of his characters are fully developed. The territory he treads is also unconventional, whether it's the aforementioned geriatric fiction, or the way he tackles the horror motif ("Incident On and Off a Mountain Road" is quite memorable). I wouldn't say The Best of Joe R. Lansdale blew me away in the sense that a collection of Ted Chiang or Jeffrey Ford stories would, but they're the next best thing and his writing is a category of its own.