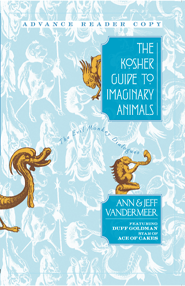 I plead guilty to not paying attention when the VanderMeers originally announced that they'll be writing The Kosher Guide to Imaginary Animals. The first thing that eluded me was the term kosher. Little did I know this was related to Jewish tradition (thankfully the introduction brought me up to speed). The second element that caught me off-guard was that I expected this to be a book of fictional creatures when it fact, it draws from existing mythology and legend (such as the Brazilian encantado [which, I might add, is very different from the Filipino encantado] or the Mongolian death worm).

Having said that, this is a really fun book. A good part of the credit goes to John Coulthart whose accompanying illustrations give life to the book. While there are some encyclopedia-like books that needs to be digested one section at a time, that's not the case here: the selection is small, the writing is brief, and the comedy is upbeat. But what really makes this work is the banter between Ann VanderMeer and Evil Monkey (Jeff VanderMeer's persona), adding a narrative thread to this nonfiction title. The reader quickly sympathizes with Ann although The Kosher Guide to Imaginary Animals wouldn't be as fun if Evil Monkey wasn't as mischievous.

Another thing to be applauded is the creature selection. For example, we have E.T. (yep, the one from the Spielberg movie) and while that's not something you'd think of eating in the first place (Evil Monkey has a gruesome imagination), the banter between our two commentators is priceless.

Each entry's layout is simple: we get the creature's name, illustration, an informal write-up, the "discussion" between Ann and Evil Monkey, and a seal of approval as to whether the said creature is kosher or not. We progress from A (Abumi-Guchi) to Z (Ziz) and before you know it, we're at the end which includes a conversation between Ann and Duff Goldman, an interview that's apt for the occasion.

The Kosher Guide to Imaginary Animals is a fun gift item and makes for a great conversation piece. Warning: sense of humor required, or else a Borges will be unleashed upon the reader.
Posted by Charles at 7:06 AM