This week's controversy revolves around Realms of Fantasy's Women in Fantasy Issue.

Interviews
Advice/Articles
News
My buddy Mattheew Hughes writes in to say that Hespira is finally out: 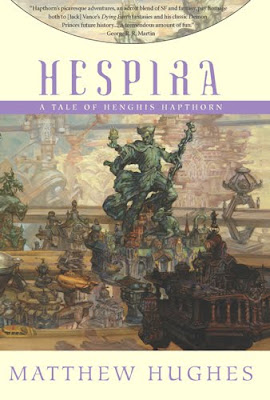 Hespira by Matthew Hughes
Posted by Charles at 6:29 AM

"This week's controversy revolves around Realms of Fantasy's Women in Fantasy Issue."

Who says controversy can't be fun?

Etymology of a Lady in Sentence Form

by Rae Bryant and Dictionary.com

1. “a woman who is refined, polite, and well-spoken"

Could you please pass me another lady, gentleman, the first one was a little too tough for my tastes.

2. “a woman of high social position or economic class"

Being a lady is a congenital trait, one is born into it like a horse is born to good breeding.

The lady on the phone said something about voting and equal pay for equal work. I wonder if her husband knows she speaks of such things.

4. “[term] used in direct address: often offensive in the singular"

Grab me a beer, will ya, little lady?

5. “a female lover or steady companion”

The governor and his lady friend attended the party. The governor's wife was furious.

7. “(initial capital letter) (in Great Britain) the proper title of any woman whose husband is higher in rank than baronet or knight, or who is the daughter of a nobleman not lower than an earl (although the title is given by courtesy also to the wives of baronets and knights)”

Lady Ashton wasn't really a lady, after all, and so she might have been considered a knight if such considerations could be paid to the female persuasion.

8. “a woman who has proprietary rights or authority, as over a manor; female feudal superior. Compare lord”

The Lady now oversees the manor until, of course, her Lord arrives home from the war.

The Lady had been seen in an oil spill just yesterday in Gary, Indiana, along with the Music Man and a cheeky little unicorn named Bob.

10. “a woman who is the object of chivalrous devotion”

A lady in all situations will hold her flatulence and her tongue offering either only when requested.

11. “(usually initial capital letter) a. an attribute or abstraction personified as a woman; a designation of an allegorical figure as feminine: Lady Fortune; Lady Virtue”

Ah, Lady Virtue. She is the beacon by which all woman measure their worth, and the stick with which all women are to be beaten should they fall short.

12. “a title prefixed to the name of a goddess: Lady Venus “

Lady Venus, the most beautiful and alluring of goddesses, may she reign in the hearts of men.

Since I am not a loaf kneading maid, an object to pass around the gentlemen's table, a British socialite, a holy deity, or a female "companion" to an ambassador, I must not be a lady. I can live with that and so can my "lord." Wink.