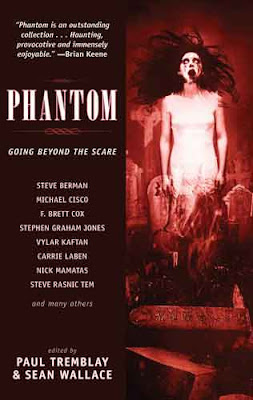 What is "literary horror," at least according to editors Paul Tremblay and Sean Wallace? The answer is Phantom, a compact anthology featuring fourteen unconventional horror stories. I wouldn't call the book striking, if striking meant being horrified or grossed out by the stories. That would, in my opinion, be the complete opposite of the goals of the anthology. Phantom isn't about immediate shock. In fact, the title is apt. The stories linger and haunt you over time as it gives you something to ponder on, as opposed to the immediacy of the prose of other horror anthologies. Because of this, it leaves Phantom in a peculiar space. On one hand, it's not a book that you recommend to a friend "Hey, if you want to get spooked, read this." Instead, it includes sensibilities that are more commonplace--to use a stereotype--in other genres such as Fiction.

Take for example "A Stain on the Stone" by Nick Mamatas. Readers are warned of spoilers: The piece is disarming as right from the start, Mamatas tricks us into believing that this is no O. Henry story. He reveals immediately what is usually the plot point of many horror cliches--that a horrible murder has been committed. This is the launching pad for exploring the psyche of the tour guide of this horrific town event, and Mamatas writes a believable protagonist, combining telling details with realistic humor. And yet, there is a surprise at the end, a concern that's less fantastical than a cult murder, but equally dreadful, although one more mundane. It's an ending that, to some extent, comes out of nowhere, but the author has been preparing us for this moment due to the careful build up. The tempo of the piece is subtle and the ending isn't an M. Night Shaylaman moment but rather a conclusion that works in the context of the reader's investment in the protagonist.

This isn't the only subversion to be found. One of my favorite stories is "The End of Everything" by Steve Eller which puts a unique spin on the zombie apocalypse. There's an emotional resonance to this piece because it's layered and complex. It makes readers question the concept of a monster in the case of the protagonist, and the undead are truly unliving because of their apathy. By the time we reach the end, we have lots of questions, and the author doesn't spoon-feed his agenda on us.

Another favorite, due to style, is "After Images" by Karen Heuler. In a certain way, this is the complete opposite of the conventional horror tale: it feels safe and upbeat. The reportage method isn't included to incite dread, but as a way of catching the reader's attention. The ending is also clever as it insinuates and rewards readers who've been reading between the lines all this time.

I enjoyed Phantom and applaud it for its alternatives to the stereotype of the horror genre. Granted, I can see some readers baffled by some of the stories, such as "She Hears Music Up Above" by F. Brett Cox, but such texts, in my opinion, is what pushes the boundaries and challenges both the reader and the author.
Posted by Charles at 6:33 AM