Book/Magazine Review: By Blood We Live by John Joseph Adams 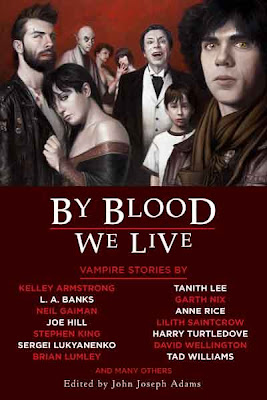 I wouldn't necessarily label the stories in By Blood We Live as some of the best fiction I've ever read, although there are pieces that definitely fall under that category. Rather, this anthology is more about breadth and scope. Editor John Joseph Adams compiles vampire stories of the past few decades, showcasing the various interpretations of this mythical creature from the sensual to the genuinely horrific. 36 stories are included in this book with a recommended reading list from Ross E. Lockhart, making this one of the essential tomes when it comes to vampire literature.

If one were the judge the stories individually, the experience is both impressive and underwhelming. For example, I'm conflicted with "Under St. Peter's" by Harry Turtledove. On one hand, if it was just literary technique, there's nothing spectacular about this story as Turtledove is merely competent. On the other hand, if we were to deliberate on the conceit of the piece, this story suddenly finds itself occupying an essential slot in the history of vampire fiction. But not every story in the book leaves me as hesitant. I'm amazed at how Adams uncovered old-but-powerful stories such as "The Master of Rampling Gate" by Anne Rice and "Child of an Ancient City" by Tad Williams. And then there are stories that are more along the lines of guilty pleasures rather than literary paragons such as "Finders Keepers" by L.A. Banks and "In Darkness, Angels" by Eric Van Lustbader.

Looking at By Blood We Live from a more holistic perspective however, this is a rare find because of its ambition and success. I mention success in terms of what the editor was aiming for, and the anthology does deliver when it comes to variety. There have been multiple iterations of the Western vampire and while not every interpretation is included here, Adams is quite thorough. "Exsanguinations" by Catherynne M. Valente for example is an effective post-modern piece, while John Langan gives a plausible update to the vampire mythos at the same time restoring some of the terror in "The Wide, Carnivorous Sky". Also worthy to mention are the stories where the actual vampires are merely at the periphery, but the authors nonetheless deliver something fresh and unique, such as "Abraham's Boys" by Joe Hill and "Much at Stake" by Kevin J. Anderson. From that particular perspective, even the ho-hum stories included in this book have a place. For example, I'm not really thrilled with "Foxtrot at High Noon" by Sergei Lukyaneko or "Pinecones" by David Wellington, but much like Turtledove's story, the way they represent a particular culture/concept is the basis for their inclusion.

Personally, Adams' biographical format can get in the way of judging the stories on their own terms. While I commend the author's bio at the beginning of each story, the succeeding paragraphs which describe the premise of the piece can dampen the impact. Which isn't to say that they should be omitted altogether as both the editor and the author have something valuable to say, but perhaps they could be included at the end of the story rather than preceding it.

Overall, By Blood We Live is a comprehensive anthology and exemplifies what makes Adams a talented editor: his ability to dig deep into the history of his theme, not only uncovering forgotten stories but commissioning new ones as well in order to contribute to the larger picture. And while not every story is literary, he also reminds us that a story has a place because it's fun and entertaining.
Posted by Charles at 6:01 AM