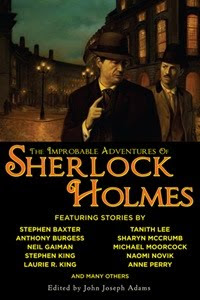 Given John Joseph Adams' track record of producing horror and science fiction anthologies, I was expecting The Improbable Adventures of Sherlock Holmes to be this fantasy romp featuring the famous detective. Going through the fiction however, it's a welcome surprise to discover that's not quite the case. Rather, this anthology is indeed a collection of "improbable" stories, whether that simply means an unconventional but "realistic" crime or one that features elements of the supernatural. The fact that it could be either, in my opinion, heightens the effectivity of the pieces. For while faithful Sir Arthur Conan Doyle fans might expect Holmes to tackle mysteries that could be solved by logic alone, the heart of the mystery genre, for me, is its ability to both foreshadow yet still surprise. In breaking this particular formula--that everything Holmes tackles can be explained through mundane means--we enter territory that's genuinely revelatory. Not that Adams is the first editor to do so, since this is mostly a reprint anthology, but he manages to collect a diverse ensemble, and making sure the reader is consistently impressed. The weakness--and strength--of a Holmes/Cthulhu mashup anthology for example is that all the stories are Holmes/Cthulhu fusions. Here, while there's a sampling of those kind of stories, it also has room to deviate, such a Holmes story that tackles a hard science fiction concept, or one devoid of the titular character yet still contributes to the mythos.

One point of complaint I usually have with Adams' anthologies is that the introduction of each story can sometimes spoil the surprise. That's not the case here, although Adams does contextualize the story, such as providing facts like Dr. Joseph Bell as the inspiration for Doyle's character. It's also clever of the editor/publisher to include "A Sherlockiana Primer" by Christopher Roden which is brief but mentions all you need to know about the cosmology of Sherlock Holmes. Another element that I'd like to comment on is style. Replicating Doyle's voice, I think, is important in this kind of anthology, as it serves as a form of continuity. To the casual reader, if it's done well, it's mostly unnoticed, but if done horribly, can be a jarring experience. However, we also don't want the stories to be faithful mimicries. Instead, a balance must be struck between preserving the author's style and that of Doyle. In that sense, the contributors do an excellent job as overall, the book does feel connected despite the stories originating from different sources and each one feels unique.

As far as the story selection goes, it's honestly uncommon to come across an anthology where one enjoys all the stories. That's the case here as each story is a welcome read, although the caveat is that there's few stories that really stand out either. I wouldn't be nominating any of these stories for awards--not even Neil Gaiman's "A Study in Emerald"--but they are entertaining and well-written, just not the type that impresses the experimental side of me. Where they excel in is expanding the lore of Holmes: "The Doctor's Case" by Stephen King for example sees the triumph of the sidekick while "The Adventure of Field Theorems" by Vonda N. McIntyre shows how authors are not their characters. "Mrs Hudson's Case" by Laruie R. King is a legacy story for me while "Commonplaces" by Naomi Novik is a piece that focuses more on the human drama, as well as presenting a plausible twist on the relationships of the characters. "Dynamics of a Hanging" by Tony Pi is a great example of how to write a Sherlock Holmes story without Sherlock Holmes, while "You See But You Do Not Observe" by Robert J. Sawyer lives up to the editor's boast that it "presents a solution to the Fermi paradox that we can virtually guarantee you've never considered before."

The Improbable Adventures of Sherlock Holmes is an anthology that aptly defies expectations as well as providing an entertaining romp.
Posted by Charles at 6:21 AM